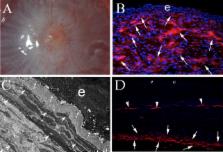 The purpose of this review was to provide detailed insights into the pathophysiology of myofibroblast-mediated fibrosis (scarring or late haze) after corneal injury, surgery, or infection.

The epithelium and epithelial basement membrane (EBM) and/or endothelium and Descemet's basement membrane (BM) are commonly disrupted after corneal injuries, surgeries, and infections. Regeneration of these critical regulatory structures relies on the coordinated production of BM components, including laminins, nidogens, perlecan, and collagen type IV by epithelial, endothelial, and keratocyte cells. Whether a cornea, or an area in the cornea, heals with transparency or fibrosis may be determined by whether there is injury to one or both corneal basement membranes (EBM and/or Descemet's BM) and delayed or defective regeneration or replacement of the BM. These opaque myofibroblasts, and the disordered extracellular matrix these cells produce, persist in the stroma until the EBM and/or Descemet's BM is regenerated or replaced.

Corneal stromal fibrosis (also termed “stromal scarring” or “late haze”) occurs as a consequence of BM injury and defective regeneration in both the anterior (EBM) and posterior (Descemet's BM) cornea. The resolution of fibrosis and return of stromal transparency depends on reestablished BM structure and function. It is hypothesized that defective regeneration of the EBM or Descemet's BM allows key profibrotic growth factors, including transforming growth factor beta-1 (TGF-β1) and TGF-β2, to penetrate the stroma at sustained levels necessary to drive the development and maintenance of mature opacity-producing myofibroblasts from myofibroblast precursors cells, and studies suggest that perlecan and collagen type IV are the critical components in EBM and Descemet's BM that bind TGF-β1, TGF-β2, platelet-derived growth factor, and possibly other growth factors, and regulate their bioavailability and function during homeostasis and corneal wound healing.

Erhard Hohenester,  Peter D. Yurchenco (2013)
The heterotrimeric laminins are a defining component of all basement membranes and self-assemble into a cell-associated network. The three short arms of the cross-shaped laminin molecule form the network nodes, with a strict requirement for one α, one β and one γ arm. The globular domain at the end of the long arm binds to cellular receptors, including integrins, α-dystroglycan, heparan sulfates and sulfated glycolipids. Collateral anchorage of the laminin network is provided by the proteoglycans perlecan and agrin. A second network is then formed by type IV collagen, which interacts with the laminin network through the heparan sulfate chains of perlecan and agrin and additional linkage by nidogen. This maturation of basement membranes becomes essential at later stages of embryo development.

J. Weng,  Steven Wilson,  Q. Y. He … (1996)
The purpose of this study was to determine the role of programmed cell death (apoptosis) in the disappearance of keratocytes beneath an epithelial debridement wound in the cornea and to investigate a potential role of interleukin-1 (IL-1) in induction of apoptosis in stromal fibroblasts in vitro and keratocytes in vivo. Keratocyte and stromal fibroblast cell morphology was examined in wounded and unwounded mouse corneas using transmission electron microscopy. Nuclear DNA fragmentation was detected with the TUNEL assay for 3'-hydroxyl DNA ends. The effect of IL-1 on keratocytes in vivo was determined by microinjection of IL-1 alpha into the central corneal stroma via a limbal entry site. The in vitro effects of interleukin-1 alpha (IL-1 alpha) and interleukin-1 beta (IL-1 beta) were determined with primary cultures of human corneal stromal and dermal fibroblasts. Cell shrinkage, blebbing with formation of membrane bound bodies, condensation and fragmentation of the chromatin, and DNA fragmentation, consistent with apoptosis were detected in anterior stromal keratocytes after epithelial scrape wounds. Thus, disappearance of keratocytes from the underlying stroma following epithelial debridement is mediated by apoptosis. Microinjection of IL-1 alpha into the central stroma of the mouse cornea caused a redistribution of keratocytes in the stroma via apoptosis and, possibly, negative chemotaxis. IL-1 alpha and IL-1 beta induced apoptosis in corneal stromal and dermal fibroblasts in vitro. The epithelial/endothelial-stromal IL-1 system may mediate corneal tissue organization and responses to mechanical- and pathogen-induced injury through induction of keratocyte apoptosis. Keratocyte apoptosis is likely an initiating event in wound healing following corneal surgery. We hypothesize that derangement's in this system may have a role in the pathogenesis of keratoconus and other diseases of the cornea.

Andre A. M. Torricelli,  Vivek Ajit Singh,  Marcony Santhiago … (2013)
The corneal epithelial basement membrane (BM) is positioned between basal epithelial cells and the stroma. This highly specialized extracellular matrix functions not only to anchor epithelial cells to the stroma and provide scaffolding during embryonic development but also during migration, differentiation, and maintenance of the differentiated epithelial phenotype. Basement membranes are composed of a diverse assemblage of extracellular molecules, some of which are likely specific to the tissue where they function; but in general they are composed of four primary components--collagens, laminins, heparan sulfate proteoglycans, and nidogens--in addition to other components such as thrombospondin-1, matrilin-2, and matrilin-4 and even fibronectin in some BM. Many studies have focused on characterizing BM due to their potential roles in normal tissue function and disease, and these structures have been well characterized in many tissues. Comparatively few studies, however, have focused on the function of the epithelial BM in corneal physiology. Since the normal corneal stroma is avascular and has relatively low keratocyte density, it is expected that the corneal BM would be different from the BM in other tissues. One function that appears critical in homeostasis and wound healing is the barrier function to penetration of cytokines from the epithelium to stroma (such as transforming growth factor β-1), and possibly from stroma to epithelium (such as keratinocyte growth factor). The corneal epithelial BM is also involved in many inherited and acquired corneal diseases. This review examines this structure in detail and discusses the importance of corneal epithelial BM in homeostasis, wound healing, and disease.