Isolation and identification of Acanthamoeba from pond water of parks in a tropical and subtropical region in the Middle East, and its relation with physicochemical parameters 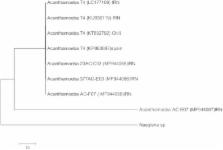 Free-living amoeba (FLA) are wide-spread protozoa that are found in different environmental sources including water, soil, dust, hospital units and ventilation areas. These amoebas can act as opportunistic or non-opportunistic pathogens. Among FLAs, some genera such as Acanthamoeba are important because of their potential pathogenic ability in humans . The purpose of this study is to identify of Acanthamoeba isolated from pond water of parks in a tropical and subtropical region in the Middle East, and its relation with physicochemical parameters.From August to December 2015, 90 samples were collected from pond water of parks of 13 regions of Mashhad City. Physicochemical parameters were measured in situ. After filtering, the samples were cultured on Bacto-agar enriched with Escherichia coli. PCR analysis was conducted on the culture-positive samples, and then the PCR products were sequenced. Statistical analysis was performed by SPSS software and Fisher’s Exact and Mann-Whitney test.

Acanthamoeba spp. as agents of disease in humans.

F Marciano-Cabral,  G. Cabral (2003)
Acanthamoeba spp. are free-living amebae that inhabit a variety of air, soil, and water environments. However, these amebae can also act as opportunistic as well as nonopportunistic pathogens. They are the causative agents of granulomatous amebic encephalitis and amebic keratitis and have been associated with cutaneous lesions and sinusitis. Immuno compromised individuals, including AIDS patients, are particularly susceptible to infections with Acanthamoeba. The immune defense mechanisms that operate against Acanthamoeba have not been well characterized, but it has been proposed that both innate and acquired immunity play a role. The ameba's life cycle includes an active feeding trophozoite stage and a dormant cyst stage. Trophozoites feed on bacteria, yeast, and algae. However, both trophozoites and cysts can retain viable bacteria and may serve as reservoirs for bacteria with human pathogenic potential. Diagnosis of infection includes direct microscopy of wet mounts of cerebrospinal fluid or stained smears of cerebrospinal fluid sediment, light or electron microscopy of tissues, in vitro cultivation of Acanthamoeba, and histological assessment of frozen or paraffin-embedded sections of brain or cutaneous lesion biopsy material. Immunocytochemistry, chemifluorescent dye staining, PCR, and analysis of DNA sequence variation also have been employed for laboratory diagnosis. Treatment of Acanthamoeba infections has met with mixed results. However, chlorhexidine gluconate, alone or in combination with propamidene isethionate, is effective in some patients. Furthermore, effective treatment is complicated since patients may present with underlying disease and Acanthamoeba infection may not be recognized. Since an increase in the number of cases of Acanthamoeba infections has occurred worldwide, these protozoa have become increasingly important as agents of human disease.

Christopher Schuster,  Hercules Moura,  Govinda S. Visvesvara (2007)
Among the many genera of free-living amoebae that exist in nature, members of only four genera have an association with human disease: Acanthamoeba spp., Balamuthia mandrillaris, Naegleria fowleri and Sappinia diploidea. Acanthamoeba spp. and B. mandrillaris are opportunistic pathogens causing infections of the central nervous system, lungs, sinuses and skin, mostly in immunocompromised humans. Balamuthia is also associated with disease in immunocompetent children, and Acanthamoeba spp. cause a sight-threatening infection, Acanthamoeba keratitis, mostly in contact-lens wearers. Of more than 30 species of Naegleria, only one species, N. fowleri, causes an acute and fulminating meningoencephalitis in immunocompetent children and young adults. In addition to human infections, Acanthamoeba, Balamuthia and Naegleria can cause central nervous system infections in animals. Because only one human case of encephalitis caused by Sappinia diploidea is known, generalizations about the organism as an agent of disease are premature. In this review we summarize what is known of these free-living amoebae, focusing on their biology, ecology, types of disease and diagnostic methods. We also discuss the clinical profiles, mechanisms of pathogenesis, pathophysiology, immunology, antimicrobial sensitivity and molecular characteristics of these amoebae.

G Visvesvara,  Christopher Schuster (2004)
Knowledge that free-living amoebae are capable of causing human disease dates back some 50 years, prior to which time they were regarded as harmless soil organisms or, at most, commensals of mammals. First Naegleria fowleri, then Acanthamoeba spp. and Balamuthia mandrillaris, and finally Sappinia diploidea have been recognised as etiologic agents of encephalitis; Acanthamoeba spp. are also responsible for amoebic keratitis. Some of the infections are opportunistic, occurring mainly in immunocompromised hosts (Acanthamoeba and Balamuthia encephalitides), while others are non-opportunistic (Acanthamoeba keratitis, Naegleria meningoencephalitis, and cases of Balamuthia encephalitis occurring in immunocompetent humans). The amoebae have a cosmopolitan distribution in soil and water, providing multiple opportunities for contacts with humans and animals, as evidenced by antibody titers in surveyed human populations. Although, the numbers of infections caused by these amoebae are low in comparison to other protozoal parasitoses (trypanosomiasis, toxoplasmosis, malaria, etc.), the difficulty in diagnosing them, the challenge of finding optimal antimicrobial treatments and the morbidity and relatively high mortality associated with, in particular, the encephalitides have been a cause for concern for clinical and laboratory personnel and parasitologists. This review presents information about the individual amoebae: their morphologies and life-cycles, laboratory cultivation, ecology, epidemiology, nature of the infections and appropriate antimicrobial therapies, the immune response, and molecular diagnostic procedures that have been developed for identification of the amoebae in the environment and in clinical specimens.

Funded by: The current study is an approved proposal in Mashhad University of Medical Sciences (MUMS) with the code 940310.
Award ID: Authors would like to thanks from MUMS for the financial support.
Award Recipient : Ali Asghar Najafpoor