Effects of a prevention intervention concerning screens, and video games in middle-school students: Influences on beliefs and use 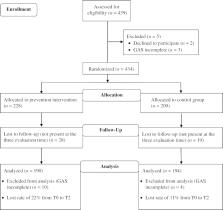 The aim of this study was to evaluate the effects of a prevention intervention on French adolescents’ Internet and video games use and on their beliefs concerning gaming and Internet Gaming Disorder (IGD), in order to adjust prevention programs further.

The study comprised a prevention intervention group (PIG) and a control group assessed at three times – baseline, post-test, and 4-month follow-up. At baseline, a total of 434 junior high adolescents from five secondary schools were assessed ( M age = 13.2 years; SD = 0.5). The main outcome measures were adolescents’ gaming and Internet use (amount of time spent during the week and the weekend), the number of adolescents with IGD, and beliefs about gaming and IGD.

The results showed significant effects of the prevention intervention on Internet and gaming use (at T2, time spent was significantly lower in the PIG), an important increase of IGD prevalence between baseline and follow-up in the control group, and decreased rates of IGD among adolescents in the PIG between post-intervention and follow-up. Between baseline and follow-up, the control group showed a more significant increase of minutes per day during the week and the weekend on Internet versus during the week on video games. The impact of the prevention intervention on adolescents’ beliefs varied according to gender. Girls had a better understanding generally of the potential dangers of and reasons for IGD.

Implications for future research and prevention approaches are discussed in this study.

Development and Validation of a Game Addiction Scale for Adolescents

Are we overpathologizing everyday life? A tenable blueprint for behavioral addiction research

Joël Billieux,  Adriano Schimmenti,  Yasser Khazaal … (2015)
Background Behavioral addiction research has been particularly flourishing over the last two decades. However, recent publications have suggested that nearly all daily life activities might lead to a genuine addiction. Methods and aim In this article, we discuss how the use of atheoretical and confirmatory research approaches may result in the identification of an unlimited list of “new” behavioral addictions. Results Both methodological and theoretical shortcomings of these studies were discussed. Conclusions We suggested that studies overpathologizing daily life activities are likely to prompt a dismissive appraisal of behavioral addiction research. Consequently, we proposed several roadmaps for future research in the field, centrally highlighting the need for longer tenable behavioral addiction research that shifts from a mere criteria-based approach toward an approach focusing on the psychological processes involved.

The Conceptualisation and Measurement of DSM-5 Internet Gaming Disorder: The Development of the IGD-20 Test

Halley Pontes,  Orsolya Király,  Zsolt Demetrovics … (2014)
Background Over the last decade, there has been growing concern about ‘gaming addiction’ and its widely documented detrimental impacts on a minority of individuals that play excessively. The latest (fifth) edition of the American Psychiatric Association's Diagnostic and Statistical Manual of Mental Disorders (DSM-5) included nine criteria for the potential diagnosis of Internet Gaming Disorder (IGD) and noted that it was a condition that warranted further empirical study. Aim: The main aim of this study was to develop a valid and reliable standardised psychometrically robust tool in addition to providing empirically supported cut-off points. Methods A sample of 1003 gamers (85.2% males; mean age 26 years) from 57 different countries were recruited via online gaming forums. Validity was assessed by confirmatory factor analysis (CFA), criterion-related validity, and concurrent validity. Latent profile analysis was also carried to distinguish disordered gamers from non-disordered gamers. Sensitivity and specificity analyses were performed to determine an empirical cut-off for the test. Results The CFA confirmed the viability of IGD-20 Test with a six-factor structure (salience, mood modification, tolerance, withdrawal, conflict and relapse) for the assessment of IGD according to the nine criteria from DSM-5. The IGD-20 Test proved to be valid and reliable. According to the latent profile analysis, 5.3% of the total participants were classed as disordered gamers. Additionally, an optimal empirical cut-off of 71 points (out of 100) seemed to be adequate according to the sensitivity and specificity analyses carried. Conclusions The present findings support the viability of the IGD-20 Test as an adequate standardised psychometrically robust tool for assessing internet gaming disorder. Consequently, the new instrument represents the first step towards unification and consensus in the field of gaming studies.

This is an open-access article distributed under the terms of the Creative Commons Attribution-NonCommercial 4.0 International License, which permits unrestricted use, distribution, and reproduction in any medium for non-commercial purposes, provided the original author and source are credited, a link to the CC License is provided, and changes – if any – are indicated.