Genetic Diversity of Mycobacterium tuberculosis Isolates from Assam, India: Dominance of Beijing Family and Discovery of Two New Clades Related to CAS1_Delhi and EAI Family Based on Spoligotyping and MIRU-VNTR Typing 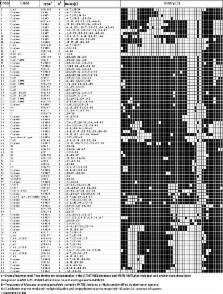 Tuberculosis (TB) is one of the major public health concerns in Assam, a remote state located in the northeastern (NE) region of India. The present study was undertaken to explore the circulating genotypes of Mycobacterium tuberculosis complex (MTBC) in this region. A total of 189 MTBC strains were collected from smear positive pulmonary tuberculosis cases from different designated microscopy centres (DMC) from various localities of Assam. All MTBC isolates were cultured on Lowenstein-Jensen (LJ) media and subsequently genotyped using spoligotyping and 24-loci mycobacterial interspersed repetitive units-variable number of tandem repeats (MIRU-VNTR) typing. Spoligotyping of MTBC isolates revealed 89 distinct spoligo patterns. The most dominant MTBC strain belonged to Beijing lineage and was represented by 35.45% (n = 67) of total isolates, followed by MTBC strains belonging to Central Asian-Delhi (CAS/Delhi) lineage and East African Indian (EAI5) lineage. In addition, in the present study 43 unknown spoligo patterns were detected. The discriminatory power of spoligotyping was found to be 0.8637 based on Hunter Gaston Discriminatory Index (HGDI). On the other hand, 24-loci MIRU-VNTR typing revealed that out of total 189 MTBC isolates from Assam 185 (97.9%) isolates had unique MIRU-VNTR profiles and 4 isolates grouped into 2 clusters. Phylogenetic analysis of 67 Beijing isolates based on 24-loci MIRU-VNTR typing revealed that Beijing isolates from Assam represent two major groups, each comprising of several subgroups. Neighbour-Joining (NJ) phylogenetic tree analysis based on combined spoligotyping and 24-loci MIRU-VNTR data of 78 Non-Beijing isolates was carried out for strain lineage identification as implemented by MIRU-VNTR plus database. The important lineages of MTBC identified were CAS/CAS1_Delhi (41.02%, n = 78) and East-African-Indian (EAI, 33.33%). Interestingly, phylogenetic analysis of orphan (23.28%) MTBC spoligotypes revealed that majority of these orphan isolates from Assam represent two new sub-clades Assam/EAI and Assam/CAS. The prevalence of multidrug resistance (MDR) in Beijing and Non-Beijing strains was found to be 10.44% and 9.01% respectively. In conclusion, the present study has shown the predominance of Beijing isolates in Assam which is a matter of great concern because Beijing strains are considered to be ecologically more fit enabling wider dissemination of M. tuberculosis. Other interesting finding of the present study is the discovery of two new clades of MTBC isolates circulating in Assam. More elaborate longitudinal studies are required to be undertaken in this region to understand the transmission dynamics of MTBC.

Christophe Demay,  Benjamin Liens,  Thomas Burguière … (2012)
Among various genotyping methods to study Mycobacterium tuberculosis complex (MTC) genotypic polymorphism, spoligotyping and mycobacterial interspersed repetitive units-variable number of DNA tandem repeats (MIRU-VNTRs) have recently gained international approval as robust, fast, and reproducible typing methods generating data in a portable format. Spoligotyping constituted the backbone of a publicly available database SpolDB4 released in 2006; nonetheless this method possesses a low discriminatory power when used alone and should be ideally used in conjunction with a second typing method such as MIRU-VNTRs for high-resolution epidemiological studies. We hereby describe a publicly available international database named SITVITWEB which incorporates such multimarker data allowing to have a global vision of MTC genetic diversity worldwide based on 62,582 clinical isolates corresponding to 153 countries of patient origin (105 countries of isolation). We report a total of 7105 spoligotype patterns (corresponding to 58,180 clinical isolates) - grouped into 2740 shared-types or spoligotype international types (SIT) containing 53,816 clinical isolates and 4364 orphan patterns. Interestingly, only 7% of the MTC isolates worldwide were orphans whereas more than half of SITed isolates (n=27,059) were restricted to only 24 most prevalent SITs. The database also contains a total of 2379 MIRU patterns (from 8161 clinical isolates) from 87 countries of patient origin (35 countries of isolation); these were grouped in 847 shared-types or MIRU international types (MIT) containing 6626 isolates and 1533 orphan patterns. Lastly, data on 5-locus exact tandem repeats (ETRs) were available on 4626 isolates from 59 countries of patient origin (22 countries of isolation); a total of 458 different VNTR patterns were observed - split into 245 shared-types or VNTR International Types (VIT) containing 4413 isolates) and 213 orphan patterns. Datamining of SITVITWEB further allowed to update rules defining MTC genotypic lineages as well to have a new insight into MTC population structure and worldwide distribution at country, sub-regional and continental levels. At evolutionary level, the data compiled may be useful to distinguish the occasional convergent evolution of genotypes versus specific evolution of sublineages essentially influenced by adaptation to the host. This database is publicly available at: http://www.pasteur-guadeloupe.fr:8081/SITVIT_ONLINE. Copyright © 2012 Elsevier B.V. All rights reserved.

Matthias Merker,  Camille Blin,  Stefano Mona … (2015)
Mycobacterium tuberculosis strains of the Beijing lineage are globally distributed and are associated with the massive spread of multidrug-resistant (MDR) tuberculosis in Eurasia. Here we reconstructed the biogeographical structure and evolutionary history of this lineage by genetic analysis of 4,987 isolates from 99 countries and whole-genome sequencing of 110 representative isolates. We show that this lineage initially originated in the Far East, from where it radiated worldwide in several waves. We detected successive increases in population size for this pathogen over the last 200 years, practically coinciding with the Industrial Revolution, the First World War and HIV epidemics. Two MDR clones of this lineage started to spread throughout central Asia and Russia concomitantly with the collapse of the public health system in the former Soviet Union. Mutations identified in genes putatively under positive selection and associated with virulence might have favored the expansion of the most successful branches of the lineage.

K. Kremer,  Paul van Helden,  E Savine … (2001)
Large-scale genotyping of Mycobacterium tuberculosis is especially challenging, as the current typing methods are labor-intensive and the results are difficult to compare among laboratories. Here, automated typing based on variable-number tandem repeats (VNTRs) of genetic elements named mycobacterial interspersed repetitive units (MIRUs) in 12 mammalian minisatellite-like loci of M. tuberculosis is presented. This system combines analysis of multiplex PCRs on a fluorescence-based DNA analyzer with computerized automation of the genotyping. Analysis of a blinded reference set of 90 strains from 38 countries (K. Kremer et al., J. Clin. Microbiol. 37:2607-2618, 1999) demonstrated that it is 100% reproducible, sensitive, and specific for M. tuberculosis complex isolates, a performance that has not been achieved by any other typing method tested in the same conditions. MIRU-VNTRs can be used for analysis of the global genetic diversity of M. tuberculosis complex strains at different levels of evolutionary divergence. To fully exploit the portability of this typing system, a website was set up for the analysis of M. tuberculosis MIRU-VNTR genotypes via the Internet. This opens the way for global epidemiological surveillance of tuberculosis and should lead to novel insights into the evolutionary and population genetics of this major pathogen.

This work was supported by the Indian Council of Medical Research; NER/17/2012-ECD-I.