Genotyping and Phylogenetic Analysis of Yersinia pestis by MLVA: Insights into the Worldwide Expansion of Central Asia Plague Foci 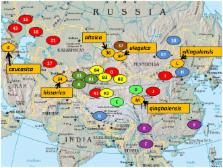 The species Yersinia pestis is commonly divided into three classical biovars, Antiqua, Medievalis, and Orientalis, belonging to subspecies pestis pathogenic for human and the (atypical) non-human pathogenic biovar Microtus (alias Pestoides) including several non- pestis subspecies. Recent progress in molecular typing methods enables large-scale investigations in the population structure of this species. It is now possible to test hypotheses about its evolution which were proposed decades ago. For instance the three classical biovars of different geographical distributions were suggested to originate from Central Asia. Most investigations so far have focused on the typical pestis subspecies representatives found outside of China, whereas the understanding of the emergence of this human pathogen requires the investigation of strains belonging to subspecies pestis from China and to the Microtus biovar.

Multi-locus VNTR analysis (MLVA) with 25 loci was performed on a collection of Y. pestis isolates originating from the majority of the known foci worldwide and including typical rhamnose-negative subspecies pestis as well as rhamnose-positive subspecies pestis and biovar Microtus. More than 500 isolates from China, the Former Soviet Union (FSU), Mongolia and a number of other foci around the world were characterized and resolved into 350 different genotypes. The data revealed very close relationships existing between some isolates from widely separated foci as well as very high diversity which can conversely be observed between nearby foci.

The results obtained are in full agreement with the view that the Y. pestis subsp. pestis pathogenic for humans emerged in the Central Asia region between China, Kazakhstan, Russia and Mongolia, only three clones of which spread out of Central Asia. The relationships among the strains in China, Central Asia and the rest of the world based on the MLVA25 assay provide an unprecedented view on the expansion and microevolution of Y. pestis.

C Pourcel, G. Salvignol, G Vergnaud … (2005)
The remarkable repetitive elements called CRISPRs (clustered regularly interspaced short palindromic repeats) consist of repeats interspaced with non-repetitive elements or 'spacers'. CRISPRs are present in both archaea and bacteria, in association with genes involved in DNA recombination and repair. In the Yersinia pestis genome, three such elements are found at three distinct loci, one of them being highly polymorphic. The authors have sequenced a total of 109 alleles of the three Y. pestis CRISPRs and they describe 29 new spacers, most being specific to one isolate. In nine strains of Yersinia pseudotuberculosis, 132 spacers were found, of which only three are common to Y. pestis isolates. In Y. pestis of the Orientalis biovar investigated in detail here, deletion of motifs is observed but it appears that addition of new motifs to a common ancestral element is the most frequent event. This takes place at the three different loci, although at a higher rate in one of the loci, and the addition of new motifs is polarized. Interestingly, the most recently acquired spacers were found to have a homologue at another locus in the genome, the majority of these inside an inactive prophage. This is believed to be the first time that the origin of the spacers in CRISPR elements has been explained. The CRISPR structure provides a new and robust identification tool.

R Perry, J. Fetherston (1997)
Plague is a widespread zoonotic disease that is caused by Yersinia pestis and has had devastating effects on the human population throughout history. Disappearance of the disease is unlikely due to the wide range of mammalian hosts and their attendant fleas. The flea/rodent life cycle of Y. pestis, a gram-negative obligate pathogen, exposes it to very different environmental conditions and has resulted in some novel traits facilitating transmission and infection. Studies characterizing virulence determinants of Y. pestis have identified novel mechanisms for overcoming host defenses. Regulatory systems controlling the expression of some of these virulence factors have proven quite complex. These areas of research have provide new insights into the host-parasite relationship. This review will update our present understanding of the history, etiology, epidemiology, clinical aspects, and public health issues of plague.

Yersinia pestis, the cause of plague, is a recently emerged clone of Yersinia pseudotuberculosis.

M. Achtman, K. Zurth, G Morelli … (1999)
Plague, one of the most devastating diseases of human history, is caused by Yersinia pestis. In this study, we analyzed the population genetic structure of Y. pestis and the two other pathogenic Yersinia species, Y. pseudotuberculosis and Y. enterocolitica. Fragments of five housekeeping genes and a gene involved in the synthesis of lipopolysaccharide were sequenced from 36 strains representing the global diversity of Y. pestis and from 12-13 strains from each of the other species. No sequence diversity was found in any Y. pestis gene, and these alleles were identical or nearly identical to alleles from Y. pseudotuberculosis. Thus, Y. pestis is a clone that evolved from Y. pseudotuberculosis 1,500-20,000 years ago, shortly before the first known pandemics of human plague. Three biovars (Antiqua, Medievalis, and Orientalis) have been distinguished by microbiologists within the Y. pestis clone. These biovars form distinct branches of a phylogenetic tree based on restriction fragment length polymorphisms of the locations of the IS100 insertion element. These data are consistent with previous inferences that Antiqua caused a plague pandemic in the sixth century, Medievalis caused the Black Death and subsequent epidemics during the second pandemic wave, and Orientalis caused the current plague pandemic.