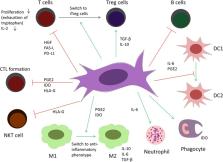 With their immunosuppressive features, human mesenchymal stromal cells (MSCs), sometimes also termed as mesenchymal stem cells, hold great potential as a cell‐based therapy for various immune‐mediated diseases. Indeed, MSCs have already been approved as a treatment for graft versus host disease. However, contradictory data from clinical trials and lack of conclusive proof of efficacy hinder the progress toward wider clinical use of MSCs and highlight the need for more relevant disease models. Humanized mice are increasingly used as models to study immune‐mediated disease, as they simulate human immunobiology more closely than conventional murine models. With further advances in their resemblance to human immunobiology, it is very likely that humanized mice will be used more commonly as models to investigate MSCs with regard to their therapeutic safety and their immunomodulatory effect and its underlying mechanisms. Recent studies that explore the immunosuppressive features of MSCs in humanized mouse models will be discussed in this review. S tem C ells 2019;37:298–305

S. Aggarwal,  Mark F. Pittenger (2005)
Mesenchymal stem cells (MSCs) are multipotent cells found in several adult tissues. Transplanted allogeneic MSCs can be detected in recipients at extended time points, indicating a lack of immune recognition and clearance. As well, a role for bone marrow-derived MSCs in reducing the incidence and severity of graft-versus-host disease (GVHD) during allogeneic transplantation has recently been reported; however, the mechanisms remain to be investigated. We examined the immunomodulatory functions of human MSCs (hMSCs) by coculturing them with purified subpopulations of immune cells and report here that hMSCs altered the cytokine secretion profile of dendritic cells (DCs), naive and effector T cells (T helper 1 [T(H)1] and T(H)2), and natural killer (NK) cells to induce a more anti-inflammatory or tolerant phenotype. Specifically, the hMSCs caused mature DCs type 1 (DC1) to decrease tumor necrosis factor alpha (TNF-alpha) secretion and mature DC2 to increase interleukin-10 (IL-10) secretion; hMSCs caused T(H)1 cells to decrease interferon gamma (IFN-gamma) and caused the T(H)2 cells to increase secretion of IL-4; hMSCs caused an increase in the proportion of regulatory T cells (T(Regs)) present; and hMSCs decreased secretion of IFN-gamma from the NK cells. Mechanistically, the hMSCs produced elevated prostaglandin E2 (PGE(2)) in co-cultures, and inhibitors of PGE(2) production mitigated hMSC-mediated immune modulation. These data offer insight into the interactions between allogeneic MSCs and immune cells and provide mechanisms likely involved with the in vivo MSC-mediated induction of tolerance that could be therapeutic for reduction of GVHD, rejection, and modulation of inflammation.

Massimo Di Nicola,  Carmelo Carlo-Stella,  Michele Magni … (2002)
CD2(+) T lymphocytes obtained from either the donor of bone marrow stromal cells (BMSCs) or a third party were cultured in mixed lymphocyte reactions (MLRs) with either allogeneic dendritic cells (DCs) or peripheral blood lymphocytes (PBLs). When autologous or allogeneic BMSCs were added back to T cells stimulated by DCs or PBLs, a significant and dose-dependent reduction of T-cell proliferation, ranging from 60% +/- 5% to 98% +/- 1%, was evident. Similarly, addition of BMSCs to T cells stimulated by polyclonal activators resulted in a 65% +/- 5% (P =.0001) suppression of proliferation. BMSC- induced T-cell suppression was still evident when BMSCs were added in culture as late as 5 days after starting of MLRs. BMSC-inhibited T lymphocytes were not apoptotic and efficiently proliferated on restimulation. BMSCs significantly suppressed both CD4(+) and CD8(+) T cells (65% +/- 5%, [P =.0005] and 75% +/- 15% [P =.0005], respectively). Transwell experiments, in which cell-cell contact between BMSCs and effector cells was prevented, resulted in a significant inhibition of T-lymphocyte proliferation, suggesting that soluble factors were involved in this phenomenon. By using neutralizing monoclonal antibodies, transforming growth factor beta1 and hepatocyte growth factor were identified as the mediators of BMSC effects. In conclusion, our data demonstrate that (1) autologous or allogeneic BMSCs strongly suppress T-lymphocyte proliferation, (2) this phenomenon that is triggered by both cellular as well as nonspecific mitogenic stimuli has no immunologic restriction, and (3) T-cell inhibition is not due to induction of apoptosis and is likely due to the production of soluble factors.