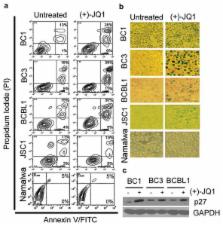 Primary effusion lymphoma (PEL) is an aggressive form of non-Hodgkin's B cell lymphoma associated with infection by Kaposi's sarcoma associated herpesvirus (KSHV). (+)-JQ1 and I-BET151 are two recently described novel small molecule inhibitors of BET bromodomain chromatin-associated proteins that have shown impressive preclinical activity in cancers in which MYC is over-expressed at the transcriptional level due to chromosomal translocations that bring the MYC gene under the control of a super-enhancer. PEL cells, in contrast, lack structural alterations in the MYC gene, but have deregulated Myc protein due to the activity of KSHV-encoded latent proteins. We report that PEL cell lines are highly sensitive to BET bromodomain inhibitors-induced growth inhibition and undergo G 0/G 1 cell-cycle arrest, apoptosis and cellular senescence, but without the induction of lytic reactivation, upon treatment with these drugs. Treatment of PEL cell lines with BET inhibitors suppressed the expression of MYC and resulted in a genome-wide perturbation of MYC-dependent genes. Silencing of BRD4 and MYC expression blocked cell proliferation and cell-cycle progression, while ectopic expression of MYC from a retroviral promoter rescued cells from (+)-JQ1-induced growth arrest. In a xenograft model of PEL, (+)-JQ1 significantly reduced tumor growth and improved survival. Taken collectively, our results demonstrate that the utility of BET inhibitors may not be limited to cancers in which genomic alterations result in extremely high expression of MYC and they may have equal or perhaps greater activity against cancers in which the MYC genomic locus is structurally intact and c-Myc protein is deregulated at the post-translational level and is only modestly over-expressed.

Zirong Li,  Sara Van Calcar,  Chunxu Qu … (2003)
Overexpression of c-Myc is one of the most common alterations in human cancers, yet it is not clear how this transcription factor acts to promote malignant transformation. To understand the molecular targets of c-Myc function, we have used an unbiased genome-wide location-analysis approach to examine the genomic binding sites of c-Myc in Burkitt's lymphoma cells. We find that c-Myc together with its heterodimeric partner, Max, occupy >15% of gene promoters tested in these cancer cells. The DNA binding of c-Myc and Max correlates extensively with gene expression throughout the genome, a hallmark attribute of general transcription factors. The c-Myc/Max heterodimer complexes also colocalize with transcription factor IID in these cells, further supporting a general role for overexpressed c-Myc in global gene regulation. In addition, transcription of a majority of c-Myc target genes exhibits changes correlated with levels of c-myc mRNA in a diverse set of tissues and cell lines, supporting the conclusion that c-Myc regulates them. Taken together, these results suggest a general role for overexpressed c-Myc in global transcriptional regulation in some cancer cells and point toward molecular mechanisms for c-Myc function in malignant transformation.

Martin Dawson,  D Knowles,  J Sald … (1996)
We recently discovered the Kaposi's sarcoma-associated herpes virus (KSHV/HHV-8) in an uncommon and unusual subset of AIDS-related lymphomas that grow mainly in the body cavities as lymphomatous effusions without an identifiable contiguous tumor mass. The consistent presence of KSHV and certain other distinctive features of these body cavity-based lymphomas suggest that they represent a distinct entity. We tested this hypothesis by investigating 19 malignant lymphomatous effusions occurring in the absence of a contiguous tumor mass for their clinical, morphologic, immunophenotypic, viral, and molecular characteristics, KSHV was present in 15 of 19 lymphomas. All four KSHV-negative lymphomatous effusions exhibited Burkitt or Burkitt-like morphology and c-myc gene rearrangements and, therefore, appeared to be Burkitt-type lymphomas occurring in the body cavities. In contrast, all 15 KSHV-positive lymphomatous effusions exhibited a distinctive morphology bridging large-cell immunoblastic lymphoma and anaplastic large-cell lymphoma, and all 12 cases studied lacked c-myc gene rearrangements. In addition, these lymphomas occurred in men (15/15), frequently but not exclusively in association with HIV infection (13/15), in which homosexuality was a risk factor (13/13), presented initially as a lymphomatous effusion (14/15), remained localized to the body cavity of origin (13/15), expressed CD45 (15/15) and one or more activation-associated antigens (9/10) in the frequent absence of B-cell-associated antigens (11/15), exhibited clonal immunoglobulin gene rearrangements (13/13), contained Epstein-Barr virus (14/15), and lacked bcl-2, bcl-6, ras and p53 gene alterations (13/15). These findings strongly suggest that the KSHV-positive malignant lymphomatous effusions represent a distinct clinicopathologic and biologic entity and should be distinguished from other malignant lymphomas occurring in the body cavities. Therefore, we recommend that these malignant lymphomas be designated primary effusion lymphomas (PEL), rather than body cavity-based lymphomas, since this term describes them more accurately and avoids their confusion with other malignant lymphomas that occur in the body cavities. We further recommend that these PEL be considered for inclusion as a new entity in the Revised European-American Lymphoma Classification.

Scott Simon,  Joelle R Zavzavadjian,  Jamie Liu … (2006)
RNAi is proving to be a powerful experimental tool for the functional annotation of mammalian genomes. The full potential of this technology will be realized through development of approaches permitting regulated manipulation of endogenous gene expression with coordinated reexpression of exogenous transgenes. We describe the development of a lentiviral vector platform, pSLIK (single lentivector for inducible knockdown), which permits tetracycline-regulated expression of microRNA-like short hairpin RNAs from a single viral infection of any naïve cell system. In mouse embryonic fibroblasts, the pSLIK platform was used to conditionally deplete the expression of the heterotrimeric G proteins Galpha12 and Galpha13 both singly and in combination, demonstrating the Galpha13 dependence of serum response element-mediated transcription. In RAW264.7 macrophages, regulated knockdown of Gbeta2 correlated with a reduced Ca(2+) response to C5a. Insertion of a GFP transgene upstream of the Gbeta2 microRNA-like short hairpin RNA allowed concomitant reexpression of a heterologous mRNA during tetracycline-dependent target gene knockdown, significantly enhancing the experimental applicability of the pSLIK system.