Case report of a duplicated cystic duct: A unique challenge for the laparoscopic surgeon 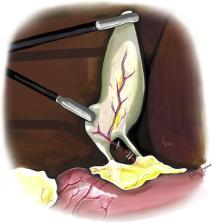 Anatomical variants of the extrahepatic biliary tree are numerous, adding significantly to the risk of bile duct injury during cholecystectomy, especially when laparoscopic approach is employed. Duplicated cystic ducts draining a single gallbladder are extremely rare.

A 34-year-old female presented with signs and symptoms of acute cholecystitis which was confirmed on imaging. She was found to have an accessory cystic duct on laparoscopic cholecystectomy requiring conversion to open laparotomy with intraoperative cholangiogram to delineate the anatomy.

In the English literature, there has been 20 reported cases of double cystic duct with a single gallbladder. Most of these cases were diagnosed intraoperatively despite the completion of a preoperative endoscopic retrograde cholangiopancreatography in a few of these patients.

The limited success of preoperative biliary tract imaging in demonstrating anatomic aberrancies prior to cholecystectomy clearly highlights the importance of maintaining constant vigilance for even the slightest anatomic abnormality at operation. Any uncertainty or concern for ductal injury mandates immediate operative cholangiogram with cannulation of all structures in question.

Y. Hirono,  Y Takita,  N. Nitta … (1997)
We report a rare case of double cystic duct in a 74-year-old woman. The patient complained of mild epigastric discomfort, and several stones were discovered by ultrasonography and computed tomography. Any anomalies of the biliary tract were undetectable in the preoperative examinations without direct cholangiography. Laparoscopic cholecystectomy was performed. After clipping the cystic duct close to the gallbladder, as usual, serial intraoperative cholangiography was performed and unexpectedly showed the inflow of contrast medium into the gallbladder via another cystic duct arising from the right hepatic duct, thus revealing one gallbladder and two cystic ducts, one of which joined the common hepatic duct and the other the right hepatic duct. There was only one cystic artery that arose from the right hepatic artery and accompanied the primary cystic duct to be distributed to the gallbladder. The existence of contrast medium in the resected specimen was confirmed by radiography. No complications occurred during or after laparoscopic cholecystectomy. This is the first report of double cystic duct found in laparoscopic cholecystectomy. We recommend routine preoperative or intraoperative cholangiography.