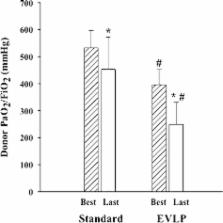 Cecilia Chaparro,  Mingyao Liu,  F. Pierre … (2011)
More than 80% of donor lungs are potentially injured and therefore not considered suitable for transplantation. With the use of normothermic ex vivo lung perfusion (EVLP), the retrieved donor lung can be perfused in an ex vivo circuit, providing an opportunity to reassess its function before transplantation. In this study, we examined the feasibility of transplanting high-risk donor lungs that have undergone EVLP. In this prospective, nonrandomized clinical trial, we subjected lungs considered to be high risk for transplantation to 4 hours of EVLP. High-risk donor lungs were defined by specific criteria, including pulmonary edema and a ratio of the partial pressure of arterial oxygen to the fraction of inspired oxygen (PO(2):FIO(2)) less than 300 mm Hg. Lungs with acceptable function were subsequently transplanted. Lungs that were transplanted without EVLP during the same period were used as controls. The primary end point was primary graft dysfunction 72 hours after transplantation. Secondary end points were 30-day mortality, bronchial complications, duration of mechanical ventilation, and length of stay in the intensive care unit and hospital. During the study period, 136 lungs were transplanted. Lungs from 23 donors met the inclusion criteria for EVLP; in 20 of these lungs, physiological function remained stable during EVLP and the median PO(2):FIO(2) ratio increased from 335 mm Hg in the donor lung to 414 and 443 mm Hg at 1 hour and 4 hours of perfusion, respectively (P<0.001). These 20 lungs were transplanted; the other 116 lungs constituted the control group. The incidence of primary graft dysfunction 72 hours after transplantation was 15% in the EVLP group and 30% in the control group (P=0.11). No significant differences were observed for any secondary end points, and no severe adverse events were directly attributable to EVLP. Transplantation of high-risk donor lungs that were physiologically stable during 4 hours of ex vivo perfusion led to results similar to those obtained with conventionally selected lungs. (Funded by Vitrolife; ClinicalTrials.gov number, NCT01190059.).

Oğuz K. Başkurt,  Herbert Meiselman (2003)
Blood is a two-phase suspension of formed elements (i.e., red blood cells [RBCs], white blood cells [WBCs], platelets) suspended in an aqueous solution of organic molecules, proteins, and salts called plasma. The apparent viscosity of blood depends on the existing shear forces (i.e., blood behaves as a non-Newtonian fluid) and is determined by hematocrit, plasma viscosity, RBC aggregation, and the mechanical properties of RBCs. RBCs are highly deformable, and this physical property significantly contributes to aiding blood flow both under bulk flow conditions and in the microcirculation. The tendency of RBCs to undergo reversible aggregation is an important determinant of apparent viscosity because the size of RBC aggregates is inversely proportional to the magnitude of shear forces; the aggregates are dispersed with increasing shear forces, then reform under low-flow or static conditions. RBC aggregation also affects the in vivo fluidity of blood, especially in the low-shear regions of the circulatory system. Blood rheology has been reported to be altered in various physiopathological processes: (1) Alterations of hematocrit significantly contribute to hemorheological variations in diseases and in certain extreme physiological conditions; (2) RBC deformability is sensitive to local and general homeostasis, with RBC deformability affected by alterations of the properties and associations of membrane skeletal proteins, the ratio of RBC membrane surface area to cell volume, cell morphology, and cytoplasmic viscosity. Such alterations may result from genetic disorders or may be induced by such factors as abnormal local tissue metabolism, oxidant stress, and activated leukocytes; and (3) RBC aggregation is mainly determined by plasma protein composition and surface properties of RBCs, with increased plasma concentrations of acute phase reactants in inflammatory disorders a common cause of increased RBC aggregation. In addition, RBC aggregation tendency can be modified by alterations of RBC surface properties because of RBC in vivo aging, oxygen-free radicals, or proteolytic enzymes. Impairment of blood fluidity may significantly affect tissue perfusion and result in functional deteriorations, especially if disease processes also disturb vascular properties.

Report of the ISHLT Working Group on Primary Lung Graft Dysfunction part II: definition. A consensus statement of the International Society for Heart and Lung Transplantation.

Conflicts of interest The authors of this manuscript have no conflict of interest to disclose.