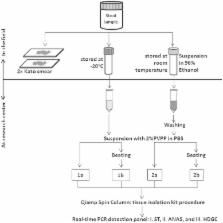 For the majority of intestinal parasites, real-time PCR-based diagnosis outperforms microscopy. However, the data for Trichuris trichiura have been less convincing and most comparative studies have been performed in populations with low prevalence. This study aims to improve detection of T. trichuria DNA in human stool by evaluating four sample preparation methods. Faecal samples ( n = 60) were collected at Flores island, Indonesia and examined by microscopy. Aliquots were taken and a bead-beating procedure was used both on directly frozen stool and on material preserved with 96% ethanol. PCR on frozen samples showed 40% to be positive for T. trichiura, compared with 45% positive by microscopy. The percentage positive increased when using ethanol preservation (45·0%), bead-beating (51·7%) and a combination (55·0%) and all three methods showed significantly higher DNA loads. The various procedures had a less pronounced effect on the PCR results of nine other parasite targets tested. Most prevalent were Ascaris lumbricoides (≈60%), Necator americanus (≈60%), Dientamoeba fragilis (≈50%) and Giardia lamblia (≈12%). To validate the practicality of the procedure, bead-beating was applied in a population-based survey testing 910 stool samples. Findings confirmed bead-beating before DNA extraction to be a highly efficient procedure for the detection of T. trichiura DNA in stool.

Rachel L. Pullan,  Jennifer Smith,  Rashmi Jasrasaria … (2014)
Background Quantifying the burden of parasitic diseases in relation to other diseases and injuries requires reliable estimates of prevalence for each disease and an analytic framework within which to estimate attributable morbidity and mortality. Here we use data included in the Global Atlas of Helminth Infection to derive new global estimates of numbers infected with intestinal nematodes (soil-transmitted helminths, STH: Ascaris lumbricoides, Trichuris trichiura and the hookworms) and use disability-adjusted life years (DALYs) to estimate disease burden. Methods Prevalence data for 6,091 locations in 118 countries were sourced and used to estimate age-stratified mean prevalence for sub-national administrative units via a combination of model-based geostatistics (for sub-Saharan Africa) and empirical approaches (for all other regions). Geographical variation in infection prevalence within these units was approximated using modelled logit-normal distributions, and numbers of individuals with infection intensities above given thresholds estimated for each species using negative binomial distributions and age-specific worm/egg burden thresholds. Finally, age-stratified prevalence estimates for each level of infection intensity were incorporated into the Global Burden of Disease Study 2010 analytic framework to estimate the global burden of morbidity and mortality associated with each STH infection. Results Globally, an estimated 438.9 million people (95% Credible Interval (CI), 406.3 - 480.2 million) were infected with hookworm in 2010, 819.0 million (95% CI, 771.7 – 891.6 million) with A. lumbricoides and 464.6 million (95% CI, 429.6 – 508.0 million) with T. trichiura. Of the 4.98 million years lived with disability (YLDs) attributable to STH, 65% were attributable to hookworm, 22% to A. lumbricoides and the remaining 13% to T. trichiura. The vast majority of STH infections (67%) and YLDs (68%) occurred in Asia. When considering YLDs relative to total populations at risk however, the burden distribution varied more considerably within major global regions than between them. Conclusion Improvements in the cartography of helminth infection, combined with mathematical modelling approaches, have resulted in the most comprehensive contemporary estimates for the public health burden of STH. These numbers form an important benchmark upon which to evaluate future scale-up of major control efforts.

A laboratory-developed TaqMan Array Card for simultaneous detection of 19 enteropathogens.

L Janaki,  Caroline Amour,  Jaap Verweij … (2013)
The TaqMan Array Card (TAC) system is a 384-well singleplex real-time PCR format that has been used to detect multiple infection targets. Here we developed an enteric TaqMan Array Card to detect 19 enteropathogens, including viruses (adenovirus, astrovirus, norovirus GII, rotavirus, and sapovirus), bacteria (Campylobacter jejuni/C. coli, Clostridium difficile, Salmonella, Vibrio cholerae, diarrheagenic Escherichia coli strains including enteroaggregative E. coli [EAEC], enterotoxigenic E. coli [ETEC], enteropathogenic E. coli [EPEC], and Shiga-toxigenic E. coli [STEC]), Shigella/enteroinvasive E. coli (EIEC), protozoa (Cryptosporidium, Giardia lamblia, and Entamoeba histolytica), and helminths (Ascaris lumbricoides and Trichuris trichiura), as well as two extrinsic controls to monitor extraction and amplification efficiency (the bacteriophage MS2 and phocine herpesvirus). Primers and probes were newly designed or adapted from published sources and spotted onto microfluidic cards. Fecal samples were spiked with extrinsic controls, and DNA and RNA were extracted using the QiaAmp Stool DNA minikit and the QuickGene RNA Tissue kit, respectively, and then mixed with Ag-Path-ID One Step real-time reverse transcription-PCR (RT-PCR) reagents and loaded into cards. PCR efficiencies were between 90% and 105%, with linearities of 0.988 to 1. The limit of detection of the assays in the TAC was within a 10-fold difference from the cognate assays performed on plates. Precision testing demonstrated a coefficient of variation of below 5% within a run and 14% between runs. Accuracy was evaluated for 109 selected clinical specimens and revealed an average sensitivity and specificity of 85% and 77%, respectively, compared with conventional methods (including microscopy, culture, and immunoassay) and 98% and 96%, respectively, compared with our laboratory-developed PCR-Luminex assays. This TAC allows fast, accurate, and quantitative detection of a broad spectrum of enteropathogens and is well suited for surveillance or clinical purposes.

Kate Templeton,  A Polderman,  Lisette van der Meer … (2004)
Entamoeba histolytica, Giardia lamblia, and Cryptosporidium are three of the most important diarrhea-causing parasitic protozoa. For many years, microscopic examination of stool samples has been considered to be the "gold standard" for diagnosis of E. histolytica, G. lamblia, and C. parvum infections. Recently, more specific and sensitive alternative methods (PCR, enzyme-linked immunosorbent assay, and direct fluorescent-antibody assay) have been introduced for all three of these parasitic infections. However, the incorporation in a routine diagnostic laboratory of these parasite-specific methods for diagnosis of each of the respective infections is time-consuming and increases the costs of a stool examination. Therefore, a multiplex real-time PCR assay was developed for the simultaneous detection of E. histolytica, G. lamblia, and C. parvum in stool samples. The multiplex PCR also included an internal control to determine efficiency of the PCR and detect inhibition in the sample. The assay was performed on species-specific DNA controls and a range of well-defined stool samples, and it achieved 100 percent specificity and sensitivity. The use of this assay in a diagnostic laboratory would provide sensitive and specific diagnosis of the main parasitic diarrheal infections and could improve patient management and infection control.

This is an Open Access article, distributed under the terms of the Creative Commons Attribution licence ( http://creativecommons.org/licenses/by/4.0/), which permits unrestricted re-use, distribution, and reproduction in any medium, provided the original work is properly cited.