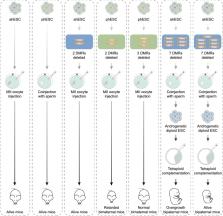 Diploidy is the typical genomic mode in all mammals. Haploid stem cells are artificial cell lines experimentally derived in vitro in the form of different types of stem cells, which combine the characteristics of haploidy with a broad developmental potential and open the possibility to uncover biological mysteries at a genomic scale. To date, a multitude of haploid stem cell types from mouse, rat, monkey and humans have been derived, as more are in development. They have been applied in high-throughput genetic screens and mammalian assisted reproduction. Here, we review the generation, unique properties and broad applications of these remarkable cells.

David B. Cochran,  Maciej Kotecki,  Alzbeta Godarova … (2009)
Loss-of-function genetic screens in model organisms have elucidated numerous biological processes, but the diploid genome of mammalian cells has precluded large-scale gene disruption. We used insertional mutagenesis to develop a screening method to generate null alleles in a human cell line haploid for all chromosomes except chromosome 8. Using this approach, we identified host factors essential for infection with influenza and genes encoding important elements of the biosynthetic pathway of diphthamide, which are required for the cytotoxic effects of diphtheria toxin and exotoxin A. We also identified genes needed for the action of cytolethal distending toxin, including a cell-surface protein that interacts with the toxin. This approach has both conceptual and practical parallels with genetic approaches in haploid yeast.

Mitotic checkpoint slippage in humans occurs via cyclin B destruction in the presence of an active checkpoint.

T D Brito,  C Rieder (2006)
In the presence of unattached/weakly attached kinetochores, the spindle assembly checkpoint (SAC) delays exit from mitosis by preventing the anaphase-promoting complex (APC)-mediated proteolysis of cyclin B, a regulatory subunit of cyclin-dependent kinase 1 (Cdk1). Like all checkpoints, the SAC does not arrest cells permanently, and escape from mitosis in the presence of an unsatisfied SAC requires that cyclin B/Cdk1 activity be inhibited. In yeast , and likely Drosophila, this occurs through an "adaptation" process involving an inhibitory phosphorylation on Cdk1 and/or activation of a cyclin-dependent kinase inhibitor (Cdki). The mechanism that allows vertebrate cells to escape mitosis when the SAC cannot be satisfied is unknown. To explore this issue, we conducted fluorescence microscopy studies on rat kangaroo (PtK) and human (RPE1) cells dividing in the presence of nocodazole. We find that in the absence of microtubules (MTs), escape from mitosis occurs in the presence of an active SAC and requires cyclin B destruction. We also find that cyclin B is progressively destroyed during the block by a proteasome-dependent mechanism. Thus, vertebrate cells do not adapt to the SAC. Rather, our data suggest that in normal cells, the SAC cannot prevent a slow but continuous degradation of cyclin B that ultimately drives the cell out of mitosis.

Examining the link between chromosomal instability and aneuploidy in human cells