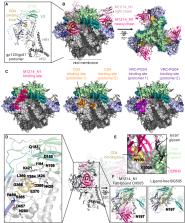 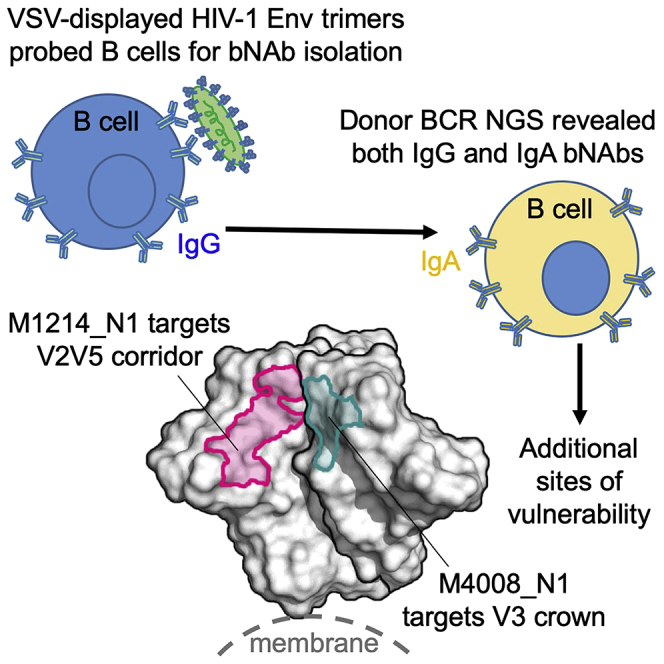 Li-Ping Zhu,  K Roux,  G Ofek … (2006)
Envelope glycoprotein (Env) spikes on AIDS retroviruses initiate infection of host cells and are therefore targets for vaccine development. Though crystal structures for partial Env subunits are known, the structure and distribution of native Env spikes on virions is obscure. We applied cryoelectron microscopy tomography to define ultrastructural details of spikes. Virions of wild-type human immunodeficiency virus 1 (HIV-1) and a mutant simian immunodeficiency virus (SIV) had approximately 14 and approximately 73 spikes per particle, respectively, with some clustering of HIV-1 spikes. Three-dimensional averaging showed that the surface glycoprotein (gp120) 'head' of each subunit of the trimeric SIV spike contains a primary mass, with two secondary lobes. The transmembrane glycoprotein 'stalk' of each trimer is composed of three independent legs that project obliquely from the trimer head, tripod-like. Reconciling available atomic structures with the three-dimensional whole spike density map yields insights into the orientation of Env spike structural elements and possible structural bases of their functions.

The antigenic structure of the HIV gp120 envelope glycoprotein.

T. Wyatt,  E. Anne Desjardins,  Margaret S. Robinson … (1998)
The human immunodeficiency virus HIV-1 establishes persistent infections in humans which lead to acquired immunodeficiency syndrome (AIDS). The HIV-1 envelope glycoproteins, gp120 and gp41, are assembled into a trimeric complex that mediates virus entry into target cells. HIV-1 entry depends on the sequential interaction of the gp120 exterior envelope glycoprotein with the receptors on the cell, CD4 and members of the chemokine receptor family. The gp120 glycoprotein, which can be shed from the envelope complex, elicits both virus-neutralizing and non-neutralizing antibodies during natural infection. Antibodies that lack neutralizing activity are often directed against the gp120 regions that are occluded on the assembled trimer and which are exposed only upon shedding. Neutralizing antibodies, by contrast, must access the functional envelope glycoprotein complex and typically recognize conserved or variable epitopes near the receptor-binding regions. Here we describe the spatial organization of conserved neutralization epitopes on gp120, using epitope maps in conjunction with the X-ray crystal structure of a ternary complex that includes a gp120 core, CD4 and a neutralizing antibody. A large fraction of the predicted accessible surface of gp120 in the trimer is composed of variable, heavily glycosylated core and loop structures that surround the receptor-binding regions. Understanding the structural basis for the ability of HIV-1 to evade the humoral immune response should assist in the design of a vaccine.

The regulation of IgA class switching.

Andrea Cerutti (2008)
IgA class switching is the process whereby B cells acquire the expression of IgA, the most abundant antibody isotype in mucosal secretions. IgA class switching occurs via both T-cell-dependent and T-cell-independent pathways, and the antibody targets both pathogenic and commensal microorganisms. This Review describes recent advances indicating that innate immune recognition of microbial signatures at the epithelial-cell barrier is central to the selective induction of mucosal IgA class switching. In addition, the mechanisms of IgA class switching at follicular and extrafollicular sites within the mucosal environment are summarized. A better understanding of these mechanisms may help in the development of more effective mucosal vaccines.