Activation of the TGFβ pathway impairs endothelial to haematopoietic transition 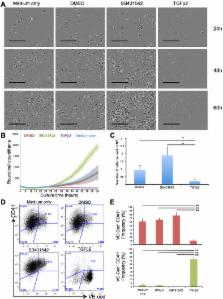 The endothelial to haematopoietic transition (EHT) is a key developmental process where a drastic change of endothelial cell morphology leads to the formation of blood stem and progenitor cells during embryogenesis. As TGFβ signalling triggers a similar event during embryonic development called epithelial to mesenchymal transition (EMT), we hypothesised that TGFβ activity could play a similar role in EHT as well. We used the mouse embryonic stem cell differentiation system for in vitro recapitulation of EHT and performed gain and loss of function analyses of the TGFβ pathway. Quantitative proteomics analysis showed that TGFβ treatment during EHT increased the secretion of several proteins linked to the vascular lineage. Live cell imaging showed that TGFβ blocked the formation of round blood cells. Using gene expression profiling we demonstrated that the TGFβ signalling activation decreased haematopoietic genes expression and increased the transcription of endothelial and extracellular matrix genes as well as EMT markers. Finally we found that the expression of the transcription factor Sox17 was up-regulated upon TGFβ signalling activation and showed that its overexpression was enough to block blood cell formation. In conclusion we showed that triggering the TGFβ pathway does not enhance EHT as we hypothesised but instead impairs it.

Julien Y. Bertrand,  Neil Chi,  Buyung Santoso … (2010)
A major goal of regenerative medicine is to instruct formation of multipotent, tissue-specific stem cells from induced pluripotent stem cells (iPSCs) for cell replacement therapies. Generation of hematopoietic stem cells (HSCs) from iPSCs or embryonic stem cells (ESCs) is not currently possible, however, necessitating a better understanding of how HSCs normally arise during embryonic development. We previously showed that hematopoiesis occurs through four distinct waves during zebrafish development, with HSCs arising in the final wave in close association with the dorsal aorta. Recent reports have suggested that murine HSCs derive from hemogenic endothelial cells (ECs) lining the aortic floor1,2. Additional in vitro studies have similarly suggested that the hematopoietic progeny of ESCs arise through intermediates with endothelial potential3,4. In this report, we have utilized the unique strengths of the zebrafish embryo to image directly the birth of HSCs from the ventral wall of the dorsal aorta. Utilizing combinations of fluorescent reporter transgenes, confocal timelapse microscopy and flow cytometry, we have identified and isolated the stepwise intermediates as aortic hemogenic endothelium transitions to nascent HSCs. Finally, using a permanent lineage tracing strategy, we demonstrate that the HSCs generated from hemogenic endothelium are the lineal founders of the adult hematopoietic system.

In vivo imaging of haematopoietic cells emerging from the mouse aortic endothelium.

Catherine Robin,  Charlotte Andrieu-Soler,  W. Van Den Wollenberg … (2010)
Haematopoietic stem cells (HSCs), responsible for blood production in the adult mouse, are first detected in the dorsal aorta starting at embryonic day 10.5 (E10.5). Immunohistological analysis of fixed embryo sections has revealed the presence of haematopoietic cell clusters attached to the aortic endothelium where HSCs might localize. The origin of HSCs has long been controversial and several candidates of the direct HSC precursors have been proposed (for review see ref. 7), including a specialized endothelial cell population with a haemogenic potential. Such cells have been described both in vitro in the embryonic stem cell (ESC) culture system and retrospectively in vivo by endothelial lineage tracing and conditional deletion experiments. Whether the transition from haemogenic endothelium to HSC actually occurs in the mouse embryonic aorta is still unclear and requires direct and real-time in vivo observation. To address this issue we used time-lapse confocal imaging and a new dissection procedure to visualize the deeply located aorta. Here we show the dynamic de novo emergence of phenotypically defined HSCs (Sca1(+), c-kit(+), CD41(+)) directly from ventral aortic haemogenic endothelial cells.

Philippe Herbomel,  Karima Kissa (2010)
The ontogeny of haematopoietic stem cells (HSCs) during embryonic development is still highly debated, especially their possible lineage relationship to vascular endothelial cells. The first anatomical site from which cells with long-term HSC potential have been isolated is the aorta-gonad-mesonephros (AGM), more specifically the vicinity of the dorsal aortic floor. But although some authors have presented evidence that HSCs may arise directly from the aortic floor into the dorsal aortic lumen, others support the notion that HSCs first emerge within the underlying mesenchyme. Here we show by non-invasive, high-resolution imaging of live zebrafish embryos, that HSCs emerge directly from the aortic floor, through a stereotyped process that does not involve cell division but a strong bending then egress of single endothelial cells from the aortic ventral wall into the sub-aortic space, and their concomitant transformation into haematopoietic cells. The process is polarized not only in the dorso-ventral but also in the rostro-caudal versus medio-lateral direction, and depends on Runx1 expression: in Runx1-deficient embryos, the exit events are initially similar, but much rarer, and abort into violent death of the exiting cell. These results demonstrate that the aortic floor is haemogenic and that HSCs emerge from it into the sub-aortic space, not by asymmetric cell division but through a new type of cell behaviour, which we call an endothelial haematopoietic transition.