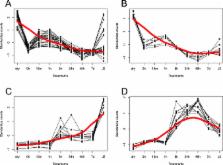 Potato cyst nematodes (PCNs), Globodera rostochiensis and G. pallida, cause important economic losses. They are hard to manage because of their ability to remain dormant in soil for many years. Although general knowledge about these plant parasitic nematodes has considerably increased over the past decades, very little is known about molecular events involved in cyst dormancy and hatching, two key steps of their development. Here, we have studied the progression of PCN transcriptomes from dry cysts to hatched juveniles using RNA-Seq. We found that several cell detoxification-related genes were highly active in the dry cysts. Many genes linked to an increase of calcium and water uptake were up-regulated during transition from dormancy to hydration. Exposure of hydrated cysts to host plant root exudates resulted in different transcriptional response between species. After 48 h of exposure, G. pallida cysts showed no significant modulation of gene expression while G. rostochiensis had 278 differentially expressed genes. The first G. rostochiensis significantly up-regulated gene was observed after 8 h and was coding for a transmembrane metalloprotease. This enzyme is able to activate/inactivate peptide hormones and could be involved in a cascade of events leading to hatching. Several known effector genes were also up-regulated during hatching.

K Beckman,  James Ames (1998)
The free radical theory of aging, conceived in 1956, has turned 40 and is rapidly attracting the interest of the mainstream of biological research. From its origins in radiation biology, through a decade or so of dormancy and two decades of steady phenomenological research, it has attracted an increasing number of scientists from an expanding circle of fields. During the past decade, several lines of evidence have convinced a number of scientists that oxidants play an important role in aging. (For the sake of simplicity, we use the term oxidant to refer to all "reactive oxygen species," including O2-., H2O2, and .OH, even though the former often acts as a reductant and produces oxidants indirectly.) The pace and scope of research in the last few years have been particularly impressive and diverse. The only disadvantage of the current intellectual ferment is the difficulty in digesting the literature. Therefore, we have systematically reviewed the status of the free radical theory, by categorizing the literature in terms of the various types of experiments that have been performed. These include phenomenological measurements of age-associated oxidative stress, interspecies comparisons, dietary restriction, the manipulation of metabolic activity and oxygen tension, treatment with dietary and pharmacological antioxidants, in vitro senescence, classical and population genetics, molecular genetics, transgenic organisms, the study of human diseases of aging, epidemiological studies, and the ongoing elucidation of the role of active oxygen in biology.

Russell Fernald,  Sheng-Lan Zhao,  Sheng Zhao (2005)
Quantitative real-time polymerase chain reactions (qRT-PCR) have become the method of choice for rapid, sensitive, quantitative comparison of RNA transcript abundance. Useful data from this method depend on fitting data to theoretical curves that allow computation of mRNA levels. Calculating accurate mRNA levels requires important parameters such as reaction efficiency and the fractional cycle number at threshold (CT) to be used; however, many algorithms currently in use estimate these important parameters. Here we describe an objective method for quantifying qRT-PCR results using calculations based on the kinetics of individual PCR reactions without the need of the standard curve, independent of any assumptions or subjective judgments which allow direct calculation of efficiency and CT. We use a four-parameter logistic model to fit the raw fluorescence data as a function of PCR cycles to identify the exponential phase of the reaction. Next, we use a three-parameter simple exponent model to fit the exponential phase using an iterative nonlinear regression algorithm. Within the exponential portion of the curve, our technique automatically identifies candidate regression values using the P-value of regression and then uses a weighted average to compute a final efficiency for quantification. For CT determination, we chose the first positive second derivative maximum from the logistic model. This algorithm provides an objective and noise-resistant method for quantification of qRT-PCR results that is independent of the specific equipment used to perform PCR reactions.

G Pitari,  Veronique S. Schulz,  Jong-Moo Park … (2000)
Guanylyl cyclases are a family of enzymes that catalyze the conversion of GTP to cGMP. The family comprises both membrane-bound and soluble isoforms that are expressed in nearly all cell types. They are regulated by diverse extracellular agonists that include peptide hormones, bacterial toxins, and free radicals, as well as intracellular molecules, such as calcium and adenine nucleotides. Stimulation of guanylyl cyclases and the resultant accumulation of cGMP regulates complex signaling cascades through immediate downstream effectors, including cGMP-dependent protein kinases, cGMP-regulated phosphodiesterases, and cyclic nucleotide-gated ion channels. Guanylyl cyclases and cGMP-mediated signaling cascades play a central role in the regulation of diverse (patho)physiological processes, including vascular smooth muscle motility, intestinal fluid and electrolyte homeostasis, and retinal phototransduction. Topics addressed in this review include the structure and chromosomal localization of the genes for guanylyl cyclases, structure and function of the members of the guanylyl cyclase family, molecular mechanisms regulating enzymatic activity, and molecular sequences coupling ligand binding to catalytic activity. A brief overview is presented of the downstream events controlled by guanylyl cyclases, including the effectors that are regulated by cGMP and the role that guanylyl cyclases play in cell physiology and pathophysiology.