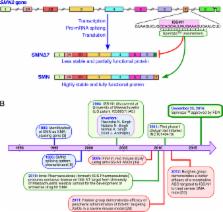 Spinal muscular atrophy (SMA) is one of the leading genetic diseases of children and infants. SMA is caused by deletions or mutations of Survival Motor Neuron 1 ( SMN1) gene. SMN2, a nearly identical copy of SMN1, cannot compensate for the loss of SMN1 due to predominant skipping of exon 7. While various regulatory elements that modulate SMN2 exon 7 splicing have been proposed, intronic splicing silencer N1 (ISS-N1) has emerged as the most promising target thus far for antisense oligonucleotide-mediated splicing correction in SMA. Upon procuring exclusive license from the University of Massachussets Medical School in 2010, Ionis Pharmaceuticals (formerly ISIS Pharamaceuticals) began clinical development of Spinraza ™ (synonyms: Nusinersen, IONIS-SMN RX, ISIS-SMN RX), an antisense drug based on ISS-N1 target. Spinraza ™ showed very promising results at all steps of the clinical development and was approved by US Food and Drug Administration (FDA) on December 23, 2016. Spinraza ™ is the first FDA-approved treatment for SMA and the first antisense drug to restore expression of a fully functional protein via splicing correction. The success of Spinraza ™ underscores the potential of intronic sequences as promising therapeutic targets and sets the stage for further improvement of antisense drugs based on advanced oligonucleotide chemistries and delivery protocols.

A single nucleotide in the SMN gene regulates splicing and is responsible for spinal muscular atrophy.

E Androphy,  Christian Lorson,  Brunhilde Wirth … (1999)
SMN1 and SMN2 (survival motor neuron) encode identical proteins. A critical question is why only the homozygous loss of SMN1, and not SMN2, results in spinal muscular atrophy (SMA). Analysis of transcripts from SMN1/SMN2 hybrid genes and a new SMN1 mutation showed a direct relationship between presence of disease and exon 7 skipping. We have reported previously that the exon-skipped product SMNDelta7 is partially defective for self-association and SMN self-oligomerization correlated with clinical severity. To evaluate systematically which of the five nucleotides that differ between SMN1 and SMN2 effect alternative splicing of exon 7, a series of SMN minigenes was engineered and transfected into cultured cells, and their transcripts were characterized. Of these nucleotide differences, the exon 7 C-to-T transition at codon 280, a translationally silent variance, was necessary and sufficient to dictate exon 7 alternative splicing. Thus, the failure of SMN2 to fully compensate for SMN1 and protect from SMA is due to a nucleotide exchange (C/T) that attenuates activity of an exonic enhancer. These findings demonstrate the molecular genetic basis for the nature and pathogenesis of SMA and illustrate a novel disease mechanism. Because individuals with SMA retain the SMN2 allele, therapy targeted at preventing exon 7 skipping could modify clinical outcome.

C Lorson,  Arthur H. M. Burghes,  Ronald J. McPherson … (1999)
Spinal muscular atrophy (SMA) is a recessive disorder characterized by loss of motor neurons in the spinal cord. It is caused by mutations in the telomeric survival motor neuron 1 ( SMN1 ) gene. Alterations within an almost identical copy gene, the centromeric survival motor neuron 2 ( SMN2 ) gene produce no known phenotypic effect. The exons of the two genes differ by just two nucleotides, neither of which alters the encoded amino acids. At the genomic level, only five nucleotides that differentiate the two genes from one another have been reported. The entire genomic sequence of the two genes has not been determined. Thus, differences which might explain why SMN1 is the SMA gene are not readily apparent. In this study, we have completely sequenced and compared genomic clones containing the SMN genes. The two genes show striking similarity, with the homology being unprecedented between two different yet functional genes. The only critical difference in an approximately 32 kb region between the two SMN genes is the C->T base change 6 bp inside exon 7. This alteration but not other variations in the SMN genes affects the splicing pattern of the genes. The majority of the transcript from the SMN1 locus is full length, whereas the majority of the transcript produced by the SMN2 locus lacks exon 7. We suggest that the exon 7 nucleotide change affects the activity of an exon splice enhancer. In SMA patients, the loss of SMN1 but the presence of SMN2 results in low levels of full-length SMN transcript and therefore low SMN protein levels which causes SMA.

This work is licensed under the Creative Commons Attribution-NonCommercial-NoDerivatives 3.0 License.