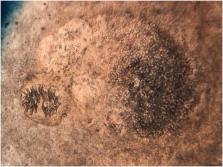 In March 2017, a captive male juvenile (ca. 6 months old) olive baboon ( Papio anubis) was brought to a primate rescue center in Benin with multiple subcutaneous swellings of unknown aetiology. At the general inspection of the body, around 15 partially mobile masses of variable sizes were found in different locations across the body. Following two surgical procedures, several cyst-like structures were removed and placed either in 10% formalin or in absolute ethanol. The cysts had a typical coenurus-like morphology. Genomic DNA was extracted from one cyst using a commercially available kit. The molecular characterization was performed by PCR amplification and sequencing of a region of the nuclear ITS-2 rDNA and a fragment of the mitochondrial 12S rDNA gene, revealing its identity as T. serialis, with 88%–98% similarity to T. serialis isolates from USA, Japan and Germany This study reports a new host for the larval form of T. serialis and confirms the role of primates as intermediate host, highlighting also the risk for human infection. Further genetic studies from multiple geographic isolates are needed to clarify the taxonomic status of this group.

Dietmar Zinner,  Jenny Wertheimer,  Rasmus Liedigk … (2013)
Baboons (genus Papio) are an interesting phylogeographical primate model for the evolution of savanna species during the Pleistocene. Earlier studies, based on partial mitochondrial sequence information, revealed seven major haplogroups indicating multiple para- and polyphylies among the six baboon species. The most basal splits among baboon lineages remained unresolved and the credibility intervals for divergence time estimates were rather large. Assuming that genetic variation within the two studied mitochondrial loci so far was insufficient to infer the apparently rapid early radiation of baboons we used complete mitochondrial sequence information of ten specimens, representing all major baboon lineages, to reconstruct a baboon phylogeny and to re-estimate divergence times. Our data confirmed the earlier tree topology including the para- and polyphyletic relationships of most baboon species; divergence time estimates are slightly younger and credibility intervals narrowed substantially, thus making the estimates more precise. However, the most basal relationships could not be resolved and it remains open whether (1) the most southern population of baboons diverged first or (2) a major split occurred between southern and northern clades. Our study shows that complete mitochondrial genome sequences are more effective to reconstruct robust phylogenies and to narrow down estimated divergence time intervals than only short portions of the mitochondrial genome, although there are also limitations in resolving phylogenetic relationships. Am J Phys Anthropol, 2013. © 2012 Wiley Periodicals, Inc.

An up-date of Verster's (1969) 'Taxonomic revision of the genus Taenia Linnaeus' (Cestoda) in table format.

B Loos (2000)
The paper 'A taxonomic revision of the genus Taenia Linnaeus, 1758 s. str.' (Verster, 1969) gives concise characterisations, together with drawings of rostellar hooks and the terminal genital organs, of the 32 Taenia species and three subspecies which this author found to be valid. Yet, it is hardly possible to quickly identify a questionable species or to readily access information on their hosts, geographical range and synonyms. The present paper compiles these data and additional information on larval characteristics into tables. Measurements and numbers of hooks are shown using a graph. Additional data are included from authors not mentioned by Verster and for seven new species (T. dinniki, T. jaipurensis, T. kotlani, T. madoquae, T. saigoni and T. simbae), two re-validated species (T. krepkogorski, T. retracta) and two subspecies (T. polyacantha arctica and T. saginata asiatica) described since 1969. Reasons for rejecting one new species and one new subspecies are given. A table of definitive hosts and the Taenia species occurring in them is also included, as is one of synonyms from 1850 onwards. A good procedure for the staining and mounting of cestodes is described.