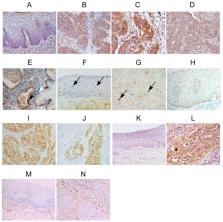 Si Chen,  Yingxi Xu,  Yanan Chen … (2012)
Recent studies demonstrated that cancer stem cells (CSCs) have higher tumorigenesis properties than those of differentiated cancer cells and that transcriptional factor-SOX2 plays a vital role in maintaining the unique properties of CSCs; however, the function and underlying mechanism of SOX2 in carcinogenesis of lung cancer are still elusive. This study applied immunohistochemistry to analyze the expression of SOX2 in human lung tissues of normal individuals as well as patients with adenocarcinoma, squamous cell carcinoma, and large cell and small cell carcinoma and demonstrated specific overexpression of SOX2 in all types of lung cancer tissues. This finding supports the notion that SOX2 contributes to the tumorigenesis of lung cancer cells and can be used as a diagnostic probe. In addition, obviously higher expression of oncogenes c-MYC, WNT1, WNT2, and NOTCH1 was detected in side population (SP) cells than in non-side population (NSP) cells of human lung adenocarcinoma cell line-A549, revealing a possible mechanism for the tenacious tumorigenic potential of CSCs. To further elucidate the function of SOX2 in tumorigenesis of cancer cells, A549 cells were established with expression of luciferase and doxycycline-inducible shRNA targeting SOX2. We found silencing of SOX2 gene reduces the tumorigenic property of A549 cells with attenuated expression of c-MYC, WNT1, WNT2, and NOTCH1 in xenografted NOD/SCID mice. By using the RNA-Seq method, an additional 246 target cancer genes of SOX2 were revealed. These results present evidence that SOX2 may regulate the expression of oncogenes in CSCs to promote the development of human lung cancer.

D Pectasides,  K Kamposioras,  G Papaxoinis … (2008)
Cervical cancer is the second most common cancer of women worldwide and one of the leading cause of death in relative young women. This review gives an outline of chemotherapy of advanced, persistent or recurrent cervical cancer. We performed a literature search in the PubMed of almost all relevant articles concerning chemotherapy of advanced, persistent or recurrent cervical cancer. The available data from the literature is mainly composed of most recent reviews, phase II and randomized phase III clinical trials. Single-agent cisplatin remains the current standard therapy for advanced, persistent or recurrent cervical cancer. Several single-agents have been tested, but none has been found to be superior compared to cisplatin. Both topotecan and paclitaxel in combination with cisplatin, have yielded superior response rates and progression-free survival without diminishing patient quality of life. However, only the combination of cisplatin and topotecan has improved overall survival. It is important to identify clinical and tumor-related factors predictive of response to cisplatin-based chemotherapy. Future trials are necessary, not only to compare combinations of existing agents, but to incorporate biological agents (monoclonal antibodies or small molecules) to chemotherapy in order to improve the treatment results of advanced, persistent or recurrent cervix cancer.