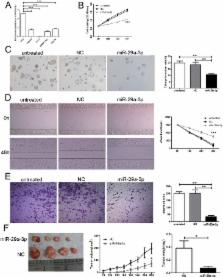 Hepatocellular carcinoma (HCC), the most common primary tumor of the liver, has a poor prognosis and rapid progression. MicroRNAs (miRNAs) play important roles in carcinogenesis and tumor progression. Insulin-like growth factor 1 receptor (IGF1R) is a transmembrane heterotetrameric protein that has been reported to promote transformation to malignancy and cancer cell proliferation and survival. In this study, we found that the expression of miR-29a-3p was downregulated in HCC patients, resulting in poor survival rates. Contrastingly, the overexpression of miR-29a-3p significantly inhibited proliferation and migration in HepG2 cells. miR-29a-3p directly targeted IGF1R and down-regulated its expression. Moreover, knockdown of IGF1R led to the increased production of chemokine ligand 5 (CCL5). In tumor lesions, the local expression of CCL5 negatively affected the expression of IGF1R. Transwell analysis showed that CCL5 was important for the chemotactic movement of CD8 + T lymphocytes. The expression of CCL5 in HCC tissues positively correlated with the expression of CD8 + T lymphocyte surface marker, CD8. Patients with high CCL5 expression exhibited better survival. Our results revealed that miR-29a-3p is a tumor suppressor gene that acts by directly repressing the oncogene IGF1R, which takes part in immunoregulation in tumor microenvironments in HCC, implying that miR-29a-3p could be a potential target for HCC treatment.

C Bartels,  Gregory J. Tsongalis (2009)
MicroRNAs (miRNAs), small RNA molecules of approximately 22 nucleotides, have been shown to be up- or downregulated in specific cell types and disease states. These molecules have become recognized as one of the major regulatory gatekeepers of coding genes in the human genome. We review the structure, nomenclature, mechanism of action, technologies used for miRNA detection, and associations of miRNAs with human cancer. miRNAs are produced in a tissue-specific manner, and changes in miRNA within a tissue type can be correlated with disease status. miRNAs appear to regulate mRNA translation and degradation via mechanisms that are dependent on the degree of complementarity between the miRNA and mRNA molecules. miRNAs can be detected via several methods, such as microarrays, bead-based arrays, and quantitative real-time PCR. The tissue concentrations of specific miRNAs have been associated with tumor invasiveness, metastatic potential, and other clinical characteristics for several types of cancers, including chronic lymphocytic leukemia, and breast, colorectal, hepatic, lung, pancreatic, and prostate cancers. By targeting and controlling the expression of mRNA, miRNAs can control highly complex signal-transduction pathways and other biological pathways. The biologic roles of miRNAs in cancer suggest a correlation with prognosis and therapeutic outcome. Further investigation of these roles may lead to new approaches for the categorization, diagnosis, and treatment of human cancers.

Ramiro Garzon,  G Calin,  Carlo Croce … (2009)
MicroRNAs (miRNAs) are associated with cytogenetics and molecular subtypes of acute myelogeneous leukemia (AML), but their impact on AML pathogenesis is poorly understood. We have previously shown that miR-29b expression is deregulated in primary AML blasts. In this work, we investigated the functional role of miR-29b in leukemogenesis. Restoration of miR-29b in AML cell lines and primary samples induces apoptosis and dramatically reduces tumorigenicity in a xenograft leukemia model. Transcriptome analysis after ectopic transfection of synthetic miR-29b into leukemia cells indicates that miR-29b target apoptosis, cell cycle, and proliferation pathways. A significant enrichment for apoptosis genes, including MCL-1, was found among the mRNAs inversely correlated with miR-29b expression in 45 primary AML samples. Together, the data support a tumor suppressor role for miR-29 and provide a rationale for the use of synthetic miR-29b oligonucleotides as a novel strategy to improve treatment response in AML.

Jasmine K Ahluwalia,  Sohrab Zafar Khan,  Kartik Soni … (2008)
Background Cellular miRNAs play an important role in the regulation of gene expression in eukaryotes. Recently, miRNAs have also been shown to be able to target and inhibit viral gene expression. Computational predictions revealed earlier that the HIV-1 genome includes regions that may be potentially targeted by human miRNAs. Here we report the functionality of predicted miR-29a target site in the HIV-1 nef gene. Results We find that the human miRNAs hsa-miR-29a and 29b are expressed in human peripheral blood mononuclear cells. Expression of a luciferase reporter bearing the nef miR-29a target site was decreased compared to the luciferase construct without the target site. Locked nucleic acid modified anti-miRNAs targeted against hsa-miR-29a and 29b specifically reversed the inhibitory effect mediated by cellular miRNAs on the target site. Ectopic expression of the miRNA results in repression of the target Nef protein and reduction of virus levels. Conclusion Our results show that the cellular miRNA hsa-miR29a downregulates the expression of Nef protein and interferes with HIV-1 replication.