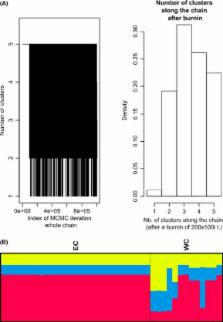 While African leopard populations are considered to be continuous as demonstrated by their high genetic variation, the southernmost leopard population exists in the Eastern and Western Cape, South Africa, where anthropogenic activities may be affecting this population's structure. Little is known about the elusive, last free-roaming top predator in the region and this study is the first to report on leopard population structuring using nuclear DNA. By analyzing 14 microsatellite markers from 40 leopard tissue samples, we aimed to understand the populations' structure, genetic distance, and gene flow ( Nm). Our results, based on spatially explicit analysis with Bayesian methods, indicate that leopards in the region exist in a fragmented population structure with lower than expected genetic diversity. Three population groups were identified, between which low to moderate levels of gene flow were observed ( Nm 0.5 to 3.6). One subpopulation exhibited low genetic differentiation, suggesting a continuous population structure, while the remaining two appear to be less connected, with low emigration and immigration between these populations. Therefore, genetic barriers are present between the subpopulations, and while leopards in the study region may function as a metapopulation, anthropogenic activities threaten to decrease habitat and movement further. Our results indicate that the leopard population may become isolated within a few generations and suggest that management actions should aim to increase habitat connectivity and reduce human–carnivore conflict. Understanding genetic diversity and connectivity of populations has important conservation implications that can highlight management of priority populations to reverse the effects of human-caused extinctions.

Gene flow and the geographic structure of natural populations.

M Slatkin (1987)
There is abundant geographic variation in both morphology and gene frequency in most species. The extent of geographic variation results from a balance of forces tending to produce local genetic differentiation and forces tending to produce genetic homogeneity. Mutation, genetic drift due to finite population size, and natural selection favoring adaptations to local environmental conditions will all lead to the genetic differentiation of local populations, and the movement of gametes, individuals, and even entire populations--collectively called gene flow--will oppose that differentiation. Gene flow may either constrain evolution by preventing adaptation to local conditions or promote evolution by spreading new genes and combinations of genes throughout a species' range. Several methods are available for estimating the amount of gene flow. Direct methods monitor ongoing gene flow, and indirect methods use spatial distributions of gene frequencies to infer past gene flow. Applications of these methods show that species differ widely in the gene flow that they experience. Of particular interest are those species for which direct methods indicate little current gene flow but indirect methods indicate much higher levels of gene flow in the recent past. Such species probably have undergone large-scale demographic changes relatively frequently.

Preservation of avian blood and tissue samples for DNA analyses

Funding Information Jeannine McManus was supported by a grant from the Carnegie Corporation of New York to the Global Change and Sustainability Research Institute at the University of the Witwatersrand. We also sincerely thank the ABAX Foundation, Henry and Iris Englund Foundation, National Lotteries Distribution Trust Fund, Mones Michaels Trust, Arne Hanson, and Deutsche Bank South Africa Foundation for assisting in sponsoring the research.