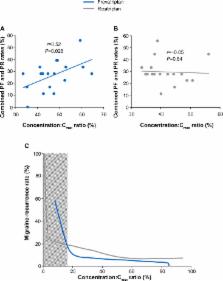 Migraine is a painful neurological disorder that affects over 10% of the general population. Frovatriptan and rizatriptan are antimigraine agents belonging to the triptan class. Although previous studies have independently compared the efficacy of these agents, contemporaneous data examining both pharmacokinetic (PK) properties and efficacy in parallel have not previously been available.

In this single-center double-blind study, 18 subjects (ten female) were treated for a single migraine attack with frovatriptan 2.5 mg or rizatriptan 10 mg. Plasma concentrations were measured predose and at 2, 4, 6, 12, 24, 48, and 72 hours after drug administration. The primary end point of this study was to evaluate the association between PK parameters and efficacy measures and recurrence rate. Secondary end points were pain-free and pain-relief episodes at 2 and 4 hours, recurrent episodes within 48 hours, and cumulative hazard of recurrence within 72 hours.

This pilot study indicates that a similar extent of initial pain relief is afforded by both triptans in migraine treatment. The longer duration of action of frovatriptan parallels and correlates with its PK profile.

Headache and comorbidity in children and adolescents

Benedetta Bellini,  Marco Arruda,  Alessandra Cescut … (2013)
Headache is one of the most common neurological symptom reported in childhood and adolescence, leading to high levels of school absences and being associated with several comorbid conditions, particularly in neurological, psychiatric and cardiovascular systems. Neurological and psychiatric disorders, that are associated with migraine, are mainly depression, anxiety disorders, epilepsy and sleep disorders, ADHD and Tourette syndrome. It also has been shown an association with atopic disease and cardiovascular disease, especially ischemic stroke and patent foramen ovale (PFO).