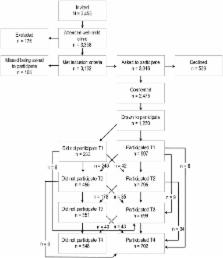 Prevalence of childhood and adult obesity in the United States, 2011-2012.

Missing data: our view of the state of the art.

Jennifer L. Schafer,  George Graham (2002)
Statistical procedures for missing data have vastly improved, yet misconception and unsound practice still abound. The authors frame the missing-data problem, review methods, offer advice, and raise issues that remain unresolved. They clear up common misunderstandings regarding the missing at random (MAR) concept. They summarize the evidence against older procedures and, with few exceptions, discourage their use. They present, in both technical and practical language, 2 general approaches that come highly recommended: maximum likelihood (ML) and Bayesian multiple imputation (MI). Newer developments are discussed, including some for dealing with missing data that are not MAR. Although not yet in the mainstream, these procedures may eventually extend the ML and MI methods that currently represent the state of the art.

Tracking of childhood overweight into adulthood: a systematic review of the literature.

A S Singh,  C. Mulder,  J Twisk … (2008)
Overweight and obesity in youth are important public health concerns and are of particular interest because of possible long-term associations with adult weight status and morbidity. The aim of this study was to systematically review the literature and update evidence concerning persistence of childhood overweight. A computerized bibliographical search--restricted to studies with a prospective or retrospective longitudinal design--was conducted. Two authors independently extracted data and assessed the methodological quality of the included studies in four dimensions (i) study population and participation rate; (ii) study attrition; (iii) data collection and (iv) data analysis. Conclusions were based on a rating system of three levels of evidence. A total of 25 publications were selected for inclusion in this review. According to a methodological quality assessment, 13 studies were considered to be of high quality. The majority of these high-quality studies were published after 2001, indicating that recently published data, in particular, provide us with reliable information. All included studies consistently report an increased risk of overweight and obese youth becoming overweight adults, suggesting that the likelihood of persistence of overweight into adulthood is moderate for overweight and obese youth. However, predictive values varied considerably. Limiting aspects with respect to generalizability and methodological issues are discussed.

This article was submitted to Eating Behavior, a section of the journal Frontiers in Psychology