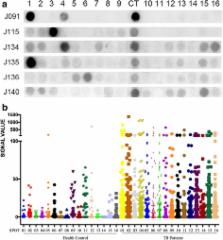 Serological antibodies tests for tuberculosis (TB) are widely used in developing countries. They appear to have some advantages- faster, simple and could be used for extrapulmonary TB. However, most of current commercial TB serological tests are failed to provide sufficient sensitivity and specificity. Improved serological biomarkers were essential. In this study, we present an approach using peptide array to discover new immunodiagnostic biomarkers based on immunodominant epitopes of TB antigens.

Our result demonstrated that peptide array screening would be an advantage strategy of screening TB diagnostic peptides.

Commercial Serological Tests for the Diagnosis of Active Pulmonary and Extrapulmonary Tuberculosis: An Updated Systematic Review and Meta-Analysis

Joseph Legutki,  Zhan-Gong Zhao,  Matt Greving … (2014)
There is an increasing awareness that health care must move from post-symptomatic treatment to presymptomatic intervention. An ideal system would allow regular inexpensive monitoring of health status using circulating antibodies to report on health fluctuations. Recently, we demonstrated that peptide microarrays can do this through antibody signatures (immunosignatures). Unfortunately, printed microarrays are not scalable. Here we demonstrate a platform based on fabricating microarrays (~10 M peptides per slide, 330,000 peptides per assay) on silicon wafers using equipment common to semiconductor manufacturing. The potential of these microarrays for comprehensive health monitoring is verified through the simultaneous detection and classification of six different infectious diseases and six different cancers. Besides diagnostics, these high-density peptide chips have numerous other applications both in health care and elsewhere.

Mark Sartain,  Richard Slayden,  Avtar Singh … (2006)
A critical element of tuberculosis control is early and sensitive diagnosis of infection and disease. Our laboratories recently showed that different stages of disease were distinguishable via two-dimensional Western blot analyses of Mycobacterium tuberculosis culture filtrate proteins. However, this methodology is not suitable for high throughput testing. Advances in protein microarray technology provide a realistic mechanism to screen a large number of serum samples against thousands of proteins to identify biomarkers of disease states. Techniques were established for separation of native M. tuberculosis cytosol and culture filtrate proteins, resulting in 960 unique protein fractions that were used to generate protein microarrays. Evaluation of serological reactivity from 42 patients in three tuberculosis disease states and healthy purified protein derivative-positive individuals demonstrated that human immunodeficiency virus (HIV)-negative cavitary and noncavitary tuberculosis (TB) patients' sera recognized 126 and 59 fractions, respectively. Sera from HIV patients coinfected with TB recognized 20 fractions of which five overlapped with those recognized by non-HIV TB patients' sera and 15 were unique to the HIV+TB+ disease state. Identification of antigens within the reactive fractions yielded 11 products recognized by both cavitary and noncavitary TB patients' sera and four proteins (HspX, MPT64, PstS1, and TrxC) specific to cavitary TB patients. Moreover four novel B cell antigens (BfrB, LppZ, SodC, and TrxC) of human tuberculosis were identified.