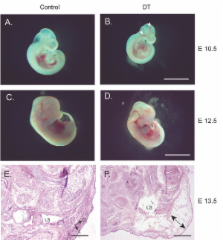 In vivo studies demonstrate that the Prox1 transcription factor plays a critical role in the development of the early lymphatic system. Upon Prox1 expression, early lymphatic endothelial cells differentiate from the cardinal vein and begin to express lymphatic markers such as VEGFR-3, LYVE-1 and Podoplanin. Subsequent in vitro studies have found that differentiated vascular endothelial cells can be reprogrammed by Prox1 to express a lymphatic gene profile, suggesting that Prox1 can initiate the expression of a unique gene signature during lymphangiogenesis. While the in vitro data suggest that gene reprogramming occurs upon Prox1 expression, it is not clear if this is a direct result of Prox1 in vascular endothelial cells in vivo.

Overexpression of Prox1 in vascular endothelial cells during embryonic development results in the reprogramming of genes to that of a more lymphatic signature. Consequent to this overexpression, embryos suffer from gross edema that results in embryonic lethality at E13.5. Furthermore, hemorrhaging and anemia is apparent along with clear defects in lymph sac development. Alterations in junctional proteins resulting in an increase in vascular permeability upon Prox1 overexpression may contribute to the complications found during embryonic development.

We present a novel mouse model that addresses the importance of Prox1 in early embryonic lymphangiogenesis. It is clear that there needs to be a measured pattern of expression of Prox1 during embryonic development. Furthermore, Prox1 reprograms vascular endothelial cells in vivo by creating a molecular signature to that of a lymphatic endothelial cell.

JAM-A regulates permeability and inflammation in the intestine in vivo

Mike Laukoetter, Porfirio Nava, Winston Lee … (2007)
Recent evidence has linked intestinal permeability to mucosal inflammation, but molecular studies are lacking. Candidate regulatory molecules localized within the tight junction (TJ) include Junctional Adhesion Molecule (JAM-A), which has been implicated in the regulation of barrier function and leukocyte migration. Thus, we analyzed the intestinal mucosa of JAM-A–deficient (JAM-A−/−) mice for evidence of enhanced permeability and inflammation. Colonic mucosa from JAM-A−/− mice had normal epithelial architecture but increased polymorphonuclear leukocyte infiltration and large lymphoid aggregates not seen in wild-type controls. Barrier function experiments revealed increased mucosal permeability, as indicated by enhanced dextran flux, and decreased transepithelial electrical resistance in JAM-A−/− mice. The in vivo observations were epithelial specific, because monolayers of JAM-A−/− epithelial cells also demonstrated increased permeability. Analyses of other TJ components revealed increased expression of claudin-10 and -15 in the colonic mucosa of JAM-A−/− mice and in JAM-A small interfering RNA–treated epithelial cells. Given the observed increase in colonic inflammation and permeability, we assessed the susceptibility of JAM-A−/− mice to the induction of colitis with dextran sulfate sodium (DSS). Although DSS-treated JAM-A−/− animals had increased clinical disease compared with controls, colonic mucosa showed less injury and increased epithelial proliferation. These findings demonstrate a complex role of JAM-A in intestinal homeostasis by regulating epithelial permeability, inflammation, and proliferation.