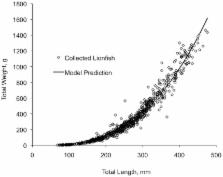 The lionfish, Pterois volitans (Linnaeus) and Pterois miles (Bennett), invasion of the Western Atlantic Ocean, Caribbean Sea and Gulf of Mexico has the potential to alter aquatic communities and represents a legitimate ecological concern. Several local removal programs have been initiated to control this invasion, but it is not known whether removal efforts can substantially reduce lionfish numbers to ameliorate these concerns. We used an age-structured population model to evaluate the potential efficacy of lionfish removal programs and identified critical data gaps for future studies. We used high and low estimates for uncertain parameters including: length at 50% vulnerability to harvest ( L vul ), instantaneous natural mortality ( M), and the Goodyear compensation ratio ( CR). The model predicted an annual exploitation rate between 35 and 65% would be required to cause recruitment overfishing on lionfish populations for our baseline parameter estimates for M and CR (0.5 and 15). Lionfish quickly recovered from high removal rates, reaching 90% of unfished biomass six years after a 50-year simulated removal program. Quantifying lionfish natural mortality and the size-selective vulnerability to harvest are the most important knowledge gaps for future research. We suggest complete eradication of lionfish through fishing is unlikely, and substantial reduction of adult abundance will require a long-term commitment and may be feasible only in small, localized areas where annual exploitation can be intense over multiple consecutive years.

Mangroves enhance the biomass of coral reef fish communities in the Caribbean.

Alastair R. Harborne,  Angela Gall,  J. Arias … (2004)
Mangrove forests are one of the world's most threatened tropical ecosystems with global loss exceeding 35% (ref. 1). Juvenile coral reef fish often inhabit mangroves, but the importance of these nurseries to reef fish population dynamics has not been quantified. Indeed, mangroves might be expected to have negligible influence on reef fish communities: juvenile fish can inhabit alternative habitats and fish populations may be regulated by other limiting factors such as larval supply or fishing. Here we show that mangroves are unexpectedly important, serving as an intermediate nursery habitat that may increase the survivorship of young fish. Mangroves in the Caribbean strongly influence the community structure of fish on neighbouring coral reefs. In addition, the biomass of several commercially important species is more than doubled when adult habitat is connected to mangroves. The largest herbivorous fish in the Atlantic, Scarus guacamaia, has a functional dependency on mangroves and has suffered local extinction after mangrove removal. Current rates of mangrove deforestation are likely to have severe deleterious consequences for the ecosystem function, fisheries productivity and resilience of reefs. Conservation efforts should protect connected corridors of mangroves, seagrass beds and coral reefs.

Geographic extent and chronology of the invasion of non-native lionfish (Pterois volitans [Linnaeus 1758] and P. miles [Bennett 1828]) in the Western North Atlantic and Caribbean Sea

Publisher ID: PONE-D-11-04025
DOI: 10.1371/journal.pone.0019666
PMC ID: 3091870
PubMed ID: 21572951
Copyright statement: Barbour et al. This is an open-access article distributed under the terms of the Creative Commons Attribution License, which permits unrestricted use, distribution, and reproduction in any medium, provided the original author and source are credited.