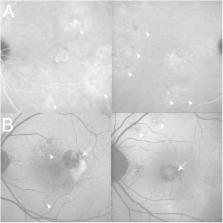 Ronald Klein,  Susan B Bressler,  Angenee C. Milton … (2005)
To develop a simplified clinical scale defining risk categories for development of advanced age-related macular degeneration (AMD). Following development of a detailed scale for individual eyes based on gradings of fundus photographs in the Age-Related Eye Disease Study, rates of progression to advanced AMD were assessed in cross-tabulations of presence or absence in each eye of 2 easily identified retinal abnormalities, drusen and pigment abnormalities. Large drusen and any pigment changes were particularly predictive of developing advanced AMD. The scoring system developed for patients assigns to each eye 1 risk factor for the presence of 1 or more large (> or = 125 microm, width of a large vein at disc margin) drusen and 1 risk factor for the presence of any pigment abnormality. Risk factors are summed across both eyes, yielding a 5-step scale (0-4) on which the approximate 5-year risk of developing advanced AMD in at least one eye increases in this easily remembered sequence: 0 factors, 0.5%; 1 factor, 3%; 2 factors, 12%; 3 factors, 25%; and 4 factors, 50%. For persons with no large drusen, presence of intermediate drusen in both eyes is counted as 1 risk factor. This simplified scale provides convenient risk categories for development of advanced AMD that can be determined by clinical examination or by less demanding photographic procedures than used in the Age-Related Eye Disease Study.