The freshwater snails (Gastropoda) of Iran, with descriptions of two new genera and eight new species 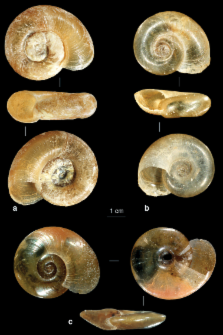 M.D. Bargues,  M Vigo,  P. Horak … (2001)
Freshwater snails of the family Lymnaeidae are of a great parasitological importance because of the very numerous helminth species they transmit, mainly trematodiases of large medical and veterinary impact. The present knowledge on the genetics of lymnaeids and on their parasite-host inter-relationships is far from being sufficient. The family is immersed in a systematic-taxonomic confusion. The necessity for a tool which enables species distinction and population characterization is evident. This paper aims to review the European Lymnaeidae basing on the second internal transcribed spacer ITS-2 of the nuclear ribosomal DNA. The ITS-2 sequences of 66 populations of 13 European and 1 North American lymnaeid species, including the five generic (or subgeneric) taxa Lymnaea sensu stricto, Stagnicola, Omphiscola, Radix and Galba, have been obtained. The ITS-2 proves to be a useful marker for resolving supraspecific, specific and population relationships in Lymnaeidae. Three different groupings according to their ITS-2 length could be distinguished: Radix and Galba may be considered the oldest taxa (370-406 bp lengths), and Lymnaea s. str., European Stagnicola and Omphiscola (468-491 bp lengths) the most recent, American Stagnicola and Hinkleyia being intermediate (434-450 bp lengths). This hypothesis agrees with the phylogeny of lymnaeids based on palaeontological data, chromosome numbers and radular dentition. ITS-2 sequences present a conserved central region flanked by two variable lateral regions corresponding to the 5' and 3' ends. The number of repeats of two microsatellites found in this conserved central region allows to differentiate Radix from all other lymnaeids. Phylogenetic trees showed four clades: (A) Lymnaea s. str., European Stagnicola and Omphiscola; (B) Radix species; (C) Galba truncatula; and (D) North American stagnicolines. ITS-2 results suggest that retaining Stagnicola as a subgenus of Lymnaea may be the most appropriate and that genus status for Omphiscola is justified. Radix shows a complexity suggesting different evolutionary lines, whereas G. truncatula appears to be very homogeneous. North American and European stagnicolines do not belong to the same supraspecific taxon; the genus Hinkleyia may be used for the American stagnicolines. Genetic distances and sequence differences allowed us to distinguish the upper limit to be expected within a single species and to how different sister species may be. S. palustris, S. fuscus and S. corvus proved to be valid species, but S. turricula may not be considered a species independent from S. palustris. Marked nucleotide divergences and genetic distances detected between different S. fuscus populations may be interpreted as a process of geographic differentiation developping in the present. Among Radix, six valid species could be distinguished: R. auricularia, R. ampla, R. peregra (=R. ovata;=R. balthica), R. labiata, R. lagotis and Radix sp. The information which the ITS-2 marker furnishes is of applied interest concerning the molluscan host specificity of the different trematode species. The phylogenetic trees inferred from the ITS-2 sequences are able to differentiate between lymnaeids transmitting and those non-transmitting fasciolids, as well as between those transmitting F. hepatica and those transmitting F. gigantica. The Fasciola specificity is linked to the two oldest genera which moreover cluster together in the phylogenetic trees, suggesting an origin of the Fasciola ancestors related to the origin of this branch. European Trichobilharzia species causing human dermatitis are transmitted only by lymnaeids of the Radix and Lymnaea s. str.-Stagnicola groups. Results suggest the convenience of reinvestigating compatibility differences after accurate lymnaeid species classification by ITS-2 sequencing. Similarly, ITS-2 sequencing would allow a step forward in the appropriate rearrangement of the actual systematic confusion among echinostomatids.

Conchometrics, systematics and distribution of Melanopsis (Mollusca: Gastropoda) in the Levant

This is an open access article distributed under the terms of the Creative Commons Attribution License 3.0 (CC-BY), which permits unrestricted use, distribution, and reproduction in any medium, provided the original author and source are credited.