Inequalities in premature mortality in Britain: observational study from 1921 to 2007 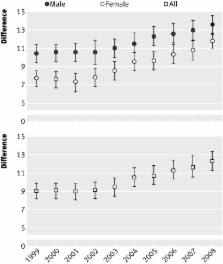 Objective To report on the extent of inequality in premature mortality as measured between geographical areas in Britain.

Results When measured by the relative index of inequality, geographical inequalities in age-sex standardised rates of mortality below age 75 have increased every two years from 1990-1 to 2006-7 without exception. Over this period the relative index of inequality increased from 1.61 (95% confidence interval 1.52 to 1.69) in 1990-1 to 2.14 (2.02 to 2.27) in 2006-7. Simple ratios indicated a brief period around 2001 when a small reduction in inequality was recorded, but this was quickly reversed and inequalities up to the age of 75 have now reached the highest levels reported since at least 1990. Similarly, inequalities in mortality ratios under the age of 65 improved slightly in the early years of this century but the latest figures surpass the most extreme previously reported. Comparison of crudely age-sex standardised rates for those below age 65 from historical records showed that geographical inequalities in mortality are higher in the most recent decade than in any similar time period for which records are available since at least 1921.

Monica Eriksson,  Bengt Lindstrøm (2005)
The editor of the journal has taken the initiative to develop glossaries on central concepts in health promotion. The aim of this paper is to explain and clarify the key concepts of the salutogenic theory sense of coherence coined by Aaron Antonovsky. The explanations and interpretations are the result of an analysis of the scientific evidence base of the first 25 years of salutogenic research, described and discussed in an ongoing project on a systematic review by the above authors. The contemporary evidence shows the salutogenic approach could have a more central position in public health and health promotion research and practice. Furthermore, it could contribute to the solution of some of the most urgent public health problems of our time such as the question of mental health promotion. Finally, it could create a solid theoretical framework for health promotion.

Health inequalities in Britain: continuing increases up to the end of the 20th century.