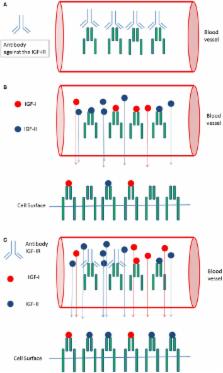 The IGF-I receptor (IGF-IR) has been studied as an anti-cancer target. However, monotherapy trials with IGF-IR targeted antibodies or with IGF-IR specific tyrosine kinase inhibitors have, overall, been very disappointing in the clinical setting. This review discusses potential reasons why IGF-I R targeted therapy fails to inhibit growth of human cancers. It has become clear that intracellular signaling pathways are highly interconnected and complex instead of being linear and simple. One of the most potent candidates for failure of IGF-IR targeted therapy is the insulin receptor isoform A (IR-A). Activation of the IR-A by insulin-like growth factor-II (IGF-II) bypasses the IGF-IR and its inhibition. Another factor may be that anti-cancer treatment may reduce IGF-IR expression. IGF-IR blocking drugs may also induce hyperglycemia and hyperinsulinemia, which may further stimulate cell growth. In addition, circulating IGF-IRs may reduce therapeutic effects of IGF-IR targeted therapy. Nevertheless, it is still possible that the IGF-IR may be a useful adjuvant or secondary target for the treatment of human cancers. Development of functional inhibitors that affect the IGF-IR and IR-A may be necessary to overcome resistance and to make IGF-IR targeted therapy successful. Drugs that modify alternative downstream effects of the IGF-IR, so called “biasing agonists,” should also be considered.

Laura Sciacca,  Giuseppe Pandini,  Riccardo Vigneri … (2009)
In mammals, the insulin receptor (IR) gene has acquired an additional exon, exon 11. This exon may be skipped in a developmental and tissue-specific manner. The IR, therefore, occurs in two isoforms (exon 11 minus IR-A and exon 11 plus IR-B). The most relevant functional difference between these two isoforms is the high affinity of IR-A for IGF-II. IR-A is predominantly expressed during prenatal life. It enhances the effects of IGF-II during embryogenesis and fetal development. It is also significantly expressed in adult tissues, especially in the brain. Conversely, IR-B is predominantly expressed in adult, well-differentiated tissues, including the liver, where it enhances the metabolic effects of insulin. Dysregulation of IR splicing in insulin target tissues may occur in patients with insulin resistance; however, its role in type 2 diabetes is unclear. IR-A is often aberrantly expressed in cancer cells, thus increasing their responsiveness to IGF-II and to insulin and explaining the cancer-promoting effect of hyperinsulinemia observed in obese and type 2 diabetic patients. Aberrant IR-A expression may favor cancer resistance to both conventional and targeted therapies by a variety of mechanisms. Finally, IR isoforms form heterodimers, IR-A/IR-B, and hybrid IR/IGF-IR receptors (HR-A and HR-B). The functional characteristics of such hybrid receptors and their role in physiology, in diabetes, and in malignant cells are not yet fully understood. These receptors seem to enhance cell responsiveness to IGFs.