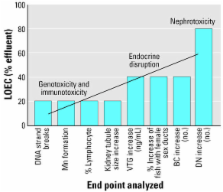 Concern has been raised in recent years that exposure to wastewater treatment effluents containing estrogenic chemicals can disrupt the endocrine functioning of riverine fish and cause permanent alterations in the structure and function of the reproductive system. Reproductive disorders may not necessarily arise as a result of estrogenic effects alone, and there is a need for a better understanding of the relative importance of endocrine disruption in relation to other forms of toxicity. Here, the integrated health effects of long-term effluent exposure are reported (reproductive, endocrine, immune, genotoxic, nephrotoxic). Early life-stage roach, Rutilus rutilus, were exposed for 300 days to treated wastewater effluent at concentrations of 0, 15.2, 34.8, and 78.7% (with dechlorinated tap water as diluent). Concentrations of treated effluents that induced feminization of male roach, measured as vitellogenin induction and histological alteration to gonads, also caused statistically significant alterations in kidney development (tubule diameter), modulated immune function (differential cell count, total number of thrombocytes), and caused genotoxic damage (micronucleus induction and single-strand breaks in gill and blood cells). Genotoxic and immunotoxic effects occurred at concentrations of wastewater effluent lower than those required to induce recognizable changes in the structure and function of the reproductive endocrine system. These findings emphasize the need for multiple biological end points in tests that assess the potential health effects of wastewater effluents. They also suggest that for some effluents, genotoxic and immune end points may be more sensitive than estrogenic (endocrine-mediated) end points as indicators of exposure in fish.

A simple technique for quantitation of low levels of DNA damage in individual cells.

Joseph McCoy,  Raymond R. Tice,  V. Singh … (1988)
Human lymphocytes were either exposed to X-irradiation (25 to 200 rads) or treated with H2O2 (9.1 to 291 microM) at 4 degrees C and the extent of DNA migration was measured using a single-cell microgel electrophoresis technique under alkaline conditions. Both agents induced a significant increase in DNA migration, beginning at the lowest dose evaluated. Migration patterns were relatively homogeneous among cells exposed to X-rays but heterogeneous among cells treated with H2O2. An analysis of repair kinetics following exposure to 200 rads X-rays was conducted with lymphocytes obtained from three individuals. The bulk of the DNA repair occurred within the first 15 min, while all of the repair was essentially complete by 120 min after exposure. However, some cells demonstrated no repair during this incubation period while other cells demonstrated DNA migration patterns indicative of more damage than that induced by the initial irradiation with X-rays. This technique appears to be sensitive and useful for detecting damage and repair in single cells.

A variety of environmentally persistent chemicals, including some phthalate plasticizers, are weakly estrogenic.

S A Jobling,  T M Reynolds,  R R White … (1995)
Sewage, a complex mixture of organic and inorganic chemicals, is considered to be a major source of environmental pollution. A random screen of 20 organic man-made chemicals present in liquid effluents revealed that half appeared able to interact with the estradiol receptor. This was demonstrated by their ability to inhibit binding of 17 beta-estradiol to the fish estrogen receptor. Further studies, using mammalian estrogen screens in vitro, revealed that the two phthalate esters butylbenzyl phthalate (BBP) and di-n-butylphthalate (DBP) and a food antioxidant, butylated hydroxyanisole (BHA) were estrogenic; however, they were all less estrogenic than the environmental estrogen octylphenol. Phthalate esters, used in the production of various plastics (including PVC), are among the most common industrial chemicals. Their ubiquity in the environment and tendency to bioconcentrate in animal fat are well known. Neither BBP nor DBP were able to act as antagonists, indicating that, in the presence of endogenous estrogens, their overall effect would be cumulative. Recently, it has been suggested that environmental estrogens may be etiological agents in several human diseases, including disorders of the male reproductive tract and breast and testicular cancers. The current finding that some phthalate compounds and some food additives are weakly estrogenic in vitro, needs to be supported by further studies on their effects in vivo before any conclusions can be made regarding their possible role in the development of these conditions. Images Figure 1. Figure 2. Figure 3. Figure 4.

Publisher ID: ehp0114s1-000081
DOI: 10.1289/ehp.8058
PMC ID: 1874182
PubMed ID: 16818251
Copyright statement: This is an Open Access article: verbatim copying and redistribution of this article are permitted in all media for any purpose, provided this notice is preserved along with the article's original DOI