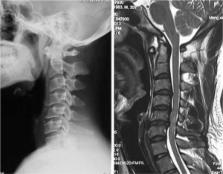 This retrospective study investigated the incidence and risk factors of poor clinical outcomes after cervical surgery for cervical spinal cord injury in a large population of patients with global or segmental cervical kyphosis.

The clinical and radiological evaluation results of 269 patients with cervical kyphosis who underwent either anterior or posterior surgery between 2008 and 2013 were collected, preoperatively and at each follow-up after surgery.

All patients were followed for an average of 2.5 years. Outcomes were classified as good or poor (n=156 and 113 patients, respectively), based on the Japanese Orthopedic Association (JOA) recovery ratios. The rates of patients with good or poor outcomes were statistically comparable with regard to gender ratio, type of injury, history of diabetes or cardiovascular disease, interval between injury and surgery, and follow-up time. The multivariate logistic regression analysis indicated that the following were independent predictors of poor improvement: patient age ( P=0.016, odds ratio [OR] =1.0261); preoperative JOA scores ( P=0.003, OR =0.1932); and cervical instability ( P=0.004, OR =2.1562).

This study showed that advanced age, low preoperative JOA score, and cervical instability are closely associated with a poor surgical outcome in patients with cervical kyphosis. However, these results do not suggest that the type of cervical kyphosis influences the clinical outcome of surgery.

Rhett Harrison,  Nolan Holland,  T Janik … (1996)
Measurements from lateral cervical radiographs of randomly selected patients are compared with two proposed ideal models. To evaluate lordotic cervical curvatures from a large population base, to provide a geometric sagittal cervical spine model, and to test the validity of the model to predict measured angles and distances. Averages of ranges and normal values for cervical lordosis under conditions of static equilibrium are sought. Seven angles and three distances were taken from 400 randomly selected lateral cervical radiographs of patients at a private clinic. The radiographic measurements are compared with predicted values from our geometric sagittal cervical spine model and the Delmas ideal cervical model. Values were predicted successfully by the geometric model with an average error of 5% compared with the radiographic measurements. The range of lordosis, measured at the posterior of C2 and C7, was 16.5-66 degrees, with a mean of 34 degrees. The average height-to-length ratio for the cervical spine was 0.97. Predicted values from the geometric model were comparable with the measurements of the relative rotation angles at each vertebral interspace, absolute rotation angles from C2 to C7, and height-to-length ratios. A cervical lordosis of 34 degrees and a height-to-length ratio of 0.97 are suggested for clinical and theoretical outcomes.

K Kaneda,  K Nagashima,  I Ohshio … (1993)
The authors report a correlation between histopathologic features and magnetic resonance images of spinal cord lesions in 19 human spinal cords with various types of lesions. Abnormally high T2-weighted image signal intensities appeared nonspecifically in mildly altered lesions or areas with edema. In the gray matter, a low T1-weighted image in addition to a high T2-weighted image signal intensity appeared in severely altered lesions with necrosis, myelomalacia, or spongiform change. In the white matter, abnormally high T1-weighted image intensities appeared in severely altered lesions. Based on these preliminary results, it appears that a correlation between the degree of histopathologic alteration of the spinal cord and magnetic resonance images in clinical cases can be made. This is the first study to clarify the correlation between histopathologic features and magnetic resonance images of the diseased human spinal cord.

Surgical outcome and prognostic factors of anterior decompression and fusion for cervical compressive myelopathy due to ossification of the posterior longitudinal ligament.