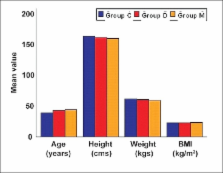 No drug, used as adjuvant to spinal bupivacaine, has yet been identified that specifically inhibits nociception without its associated side-effects.

This prospective randomized double-blind study was conducted to evaluate the onset and duration of sensory and motor block as well as perioperative analgesia and adverse effects of dexmedetomidine and magnesium sulfate given intrathecally with 0.5% hyperbaric bupivacaine for spinal anesthesia.

All statistical analyses were performed using INSTAT for windows. Continuous variables were tested for normal distribution by the Kolmogorov-Smirnov test. Data was expressed as either mean and standard deviation or numbers and percentages. Continuous covariates (age, body mass index and height) were compared using analysis of variance (ANOVA). For the times to reach T10 dermatomes, Bromage 3 scale and the regression of the sensory block to S1 dermatome and Bromage scale 0, one-way ANOVA was used to compare the means. The level of significance used was P<0.05.

The onset times to reach T10 dermatome and to reach peak sensory level as well as onset time to reach modified Bromage 3 motor block were significantly different in the three groups. The onset time to reach peak sensory and motor level was shorter in group D as compared with the control group C, and it was significantly prolonged in group M. We also found that patients in group D had significant longer sensory and motor block times than patients in group M, which was greater than in the control group C.

It was found that onset of anesthesia was rapid and of prolonged duration in the dexmedetomidine group (D). However, in the magnesium sulfate group (M), although onset of block was delayed, the duration was significantly prolonged as compared with the control group (C), but to a lesser degree than in the dexmedetomidine group (D). The groups were similar with respect to hemodynamic variables and there were no significant side-effects in either of the groups.

A comparison of the hydrochloride and carbon dioxide salts of lidocaine and prilocaine in epidural analgesia.

Comparison between dexmedetomidine and propofol for sedation in the intensive care unit: patient and clinician perceptions.

R Michael Grounds,  M. Venn (2001)
The alpha2 agonist dexmedetomidine is a new sedative and analgesic agent which is licensed in the USA for post-operative intensive care sedation. We compared dexmedetomidine with propofol in patients requiring sedation in intensive care. Twenty adult patients expected to require a minimum of 8 h artificial ventilation after surgery were randomized to receive sedation with either dexmedetomidine or propofol infusions. Additional analgesia, if required, was provided by an alfentanil infusion. Depth of sedation was monitored using both the Ramsay sedation score (RSS) and the bispectral index (BIS). Cardiovascular, respiratory, biochemical and haematological data were obtained. Patients' perceptions of their intensive care stay were assessed using the Hewitt questionnaire. Sedation was equivalent in the two groups [median (interquartile range): RSS, propofol group 5 (4-5), dexmedetomidine group 5 (4-6) (P=0.68); BIS, propofol group 53 (41-64), dexmedetomidine group 46 (36-58); P=0.32], but the propofol group received three times more alfentanil compared with patients sedated with dexmedetomidine [2.5 (2.2-2.9) mg h(-1) versus 0.8 (0.65-1.2) mg h(-1) (P=0.004)]. No differences were found in arterial pressures between the groups, but heart rate was significantly lower in the dexmedetomidine group [mean (SD) 75 (6) vs 90 (4) beats min(-1)]. Extubation times were similar and rapid with the use of both sedative agents [median (range) 28 (20-50) and 29 (15-50) min (P=0.63) respectively for the propofol and dexmedetomidine groups]. No adverse events related to the sedative infusions occurred in either group. Despite ventilation and intubation, patients sedated with dexmedetomidine could be easily roused to cooperate with procedures (e.g. physiotherapy, radiology) without showing irritation. From the clinician's and patient's perspectives, dexmedetomidine is a safe and acceptable sedative agent for those requiring intensive care. The rate pressure product is reduced in patients receiving dexmedetomidine, which may protect against myocardial ischaemia. Dexmedetomidine reduces the requirement for opioid analgesia.

D A Male,  James Fawcett,  J Haxby (1999)
Magnesium has an established role in obstetrics and an evolving role in other clinical areas, in particular cardiology. Many of the effects involving magnesium are still a matter of controversy. Over the next decade, it is likely that improvements in the measurement of magnesium, a clearer understanding of the mechanisms of its actions and further results of clinical studies will help to elucidate its role, both in terms of treating deficiency and as a pharmacological agent.