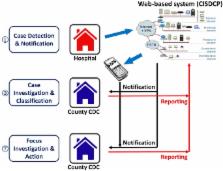 Qi Gao and colleagues describe China's 1-3-7 strategy for eliminating malaria: reporting of malaria cases within one day, their confirmation and investigation within three days, and the appropriate public health response to prevent further transmission within seven days.

Bruno Moonen,  Justin Cohen,  Robert W. Snow … (2010)
Summary Present elimination strategies are based on recommendations derived during the Global Malaria Eradication Program of the 1960s. However, many countries considering elimination nowadays have high intrinsic transmission potential and, without the support of a regional campaign, have to deal with the constant threat of imported cases of the disease, emphasising the need to revisit the strategies on which contemporary elimination programmes are based. To eliminate malaria, programmes need to concentrate on identification and elimination of foci of infections through both passive and active methods of case detection. This approach needs appropriate treatment of both clinical cases and asymptomatic infections, combined with targeted vector control. Draining of infectious pools entirely will not be sufficient since they could be replenished by imported malaria. Elimination will thus additionally need identification and treatment of incoming infections before they lead to transmission, or, more realistically, embarking on regional initiatives to dry up importation at its source.

A method of active case detection to target reservoirs of asymptomatic malaria and gametocyte carriers in a rural area in Southern Province, Zambia

Gillian H Stresman,  Aniset Kamanga,  Petros Moono … (2010)
Background Asymptomatic reservoirs of malaria parasites are common yet are difficult to detect, posing a problem for malaria control. If control programmes focus on mosquito control and treatment of symptomatic individuals only, malaria can quickly resurge if interventions are scaled back. Foci of parasite populations must be identified and treated. Therefore, an active case detection system that facilitates detection of asymptomatic parasitaemia and gametocyte carriers was developed and tested in the Macha region in southern Zambia. Methods Each week, nurses at participating rural health centres (RHC) communicated the number of rapid diagnostic test (RDT) positive malaria cases to a central research team. During the dry season when malaria transmission was lowest, the research team followed up each positive case reported by the RHC by a visit to the homestead. The coordinates of the location were obtained by GPS and all consenting residents completed a questionnaire and were screened for malaria using thick blood film, RDT, nested-PCR, and RT-PCR for asexual and sexual stage parasites. Persons who tested positive by RDT were treated with artemether/lumefantrine (Coartem®). Data were compared with a community-based study of randomly selected households to assess the prevalence of asymptomatic parasitaemia in the same localities in September 2009. Results In total, 186 and 141 participants residing in 23 case and 24 control homesteads, respectively, were screened. In the case homesteads for which a control population was available (10 of the 23), household members of clinically diagnosed cases had a 8.0% prevalence of malaria using PCR compared to 0.7% PCR positive individuals in the control group (p = 0.006). The case and control groups had a gametocyte prevalence of 2.3% and 0%, respectively but the difference was not significant (p = 0.145). Conclusions This pilot project showed that active case detection is feasible and can identify reservoirs of asymptomatic infection. A larger sample size, data over multiple low transmission seasons, and in areas with different transmission dynamics are needed to further validate this approach.

This work was supported by the Jiangsu Province's Medical High Tech Platform (ZX201108), the Jiangsu Province's Construction Project (BM2009902), the Asia Pacific Malaria Elimination Network (APMEN), and the Program for National S & T Major Program (No. 2012ZX10004-220) to JC, HZ, YL, and QG. HJWS and RDG are supported by a grant from the Bill & Melinda Gates Foundation [#OPP1013170]. The funders had no role in study design, data collection and analysis, decision to publish, or preparation of the manuscript.