Endomyocardial fibrosis and calcification in an elderly patient 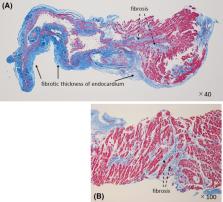 Endomyocardial fibrosis (EMF) is a rare restrictive cardiomyopathy in developed countries. The prognosis of EMF depends on severity of heart failure, and it is generally poor as there is no proven specific effective therapy. We have experienced a rare case of EMF in an elderly Japanese man.

A population study of endomyocardial fibrosis in a rural area of Mozambique.

Fernanda M. Ferreira,  D Sidi,  Ana Olga Mocumbi … (2008)
Endomyocardial fibrosis is the most common restrictive cardiomyopathy worldwide. It has no specific treatment and carries a poor prognosis, since most patients present with advanced heart failure. On the basis of clinical series, regional variations in distribution have been reported within several countries in Africa, Asia, and South America, but large-scale data are lacking on the epidemiologic features and early stages of the disease. We used transthoracic echocardiography to determine the prevalence of endomyocardial fibrosis in a rural area of Mozambique. We screened a random sample of 1063 subjects of all age groups selected by clustering. Major and minor diagnostic criteria were defined, and a severity score was developed and applied. Cases were classified according to the distribution and severity of the lesions in the heart. The estimated overall prevalence of endomyocardial fibrosis was 19.8%, or 211 of 1063 subjects (95% confidence interval [CI], 17.4 to 22.2). The prevalence was highest among persons 10 to 19 years of age (28.1%, or 73 of 260 subjects [95% CI, 22.6 to 33.6]) and was higher among male than among female subjects (23.0% vs. 17.5%, P=0.03). The most common form was biventricular endomyocardial fibrosis (a prevalence of 55.5%, or 117 of 211 subjects [95% CI, 48.8 to 62.2]), followed by right-sided endomyocardial fibrosis (a prevalence of 28.0%, or 59 of 211 subjects [95% CI, 21.9 to 34.1]). Most affected subjects had mild-to-moderate structural and functional echocardiographic abnormalities. Only 48 persons with endomyocardial fibrosis (22.7%) were symptomatic. The frequency of familial occurrence was high. Endomyocardial fibrosis is common in a rural area of Mozambique. By using echocardiography, we were able to detect early, asymptomatic stages of the disease. These findings may aid in the study of the pathogenesis of the disease and in the development of new management strategies. 2008 Massachusetts Medical Society