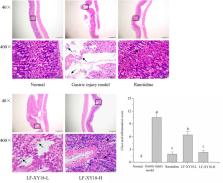 Lactobacillus fermentum XY18 (LF-XY18) is a bacterial strain with satisfactory antioxidant properties in vitro that we previously isolated from Xinjiang yogurt. This article will explore the preventive effect of LF-XY18 on acute gastric injury and provide the basis for the innovative development and application of lactic acid bacteria (LAB).

Kunming mice underwent gastric injury induced by hydrochloric acid and ethanol. LF-XY18 isolated from yogurt in Xinyuan County in the Yili region of Xinjiang was subsequently administered intragastrically to mice for 2 weeks to explore the mechanism of LF-XY18 in preventing gastric injury via its antioxidant effects.

There was decreased gastric juice volume, gastric injury area, and formation of gastric mucosal lesions in the LF-XY18 mice as compared to those in the control mice, while LF-XY18 prevented the decrease in the gastric juice pH value in mice. Compared with the gastric injury model group mice, LF-XY18 reduced the serum levels of motilin, substance P, interleukin-6, interleukin-12, tumor necrosis factor-α, and interferon-γ but increased the serum levels of somatostatin and vasoactive intestinal peptide. The activities of superoxide dismutase, glutathione peroxidase, glutathione, and nitric oxide were increased in the gastric tissue of the LF-XY18 mice compared with the control mice, but malondialdehyde activity was decreased in the LF-XY18 mice. Quantitative polymerase chain reaction analysis illustrated that in the gastric tissue of LF-XY18 mice, the messenger RNA (mRNA) expression of occludin, epidermal growth factor (EGF), EGF receptor, vascular EGF, inhibitor kappa-B-α, neuronal nitric oxide synthase, endothelial nitric oxide synthase, cuprozinc superoxide dismutase, manganese superoxide dismutase, and catalase was stronger than that in the control mice, but the mRNA expression of activated B cells (NF-κB), inducible nitric oxide synthase, and cyclooxygenase-2 was weaker than in the control mice.

Protective activity of salidroside against ethanol-induced gastric ulcer via the MAPK/NF-κB pathway in vivo and in vitro.

Pingyi Liu,  Lingling Chen,  Haiyan Zhang (2018)
Nature killer (NK) cells play a critical role in host innate and adaptive immune defense against viral infections and tumors. NK cells are enriched in liver hematopoietic cells with unique NK repertories and functions to safeguard liver cells against hepatitis virus infection or malignancy transformation. However, accumulating evidences were found that the NK cells were modulated by liver diseases and liver cancers including hepatocellular carcinoma (HCC) and showed impaired functions failing to activate the elimination of the viral-infected cells or tumor cells and were further involved in the pathogenesis of liver injury and inflammation. The full characterization of circulation and intrahepatic NK cell phenotype and function in liver disease and liver cancer has not only provided new insight into the disease pathogenesis but has also discovered new targets for developing new NK cell-based therapeutic strategies. This review will discuss and summarize the NK cell phenotypic and functional changes in liver disease and HCC, and the NK cell-based immunotherapy approaches and progresses for cancers including HCC will also be reviewed.