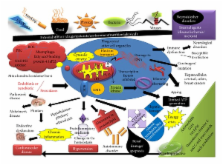 Oxidative stress is a normal phenomenon in the body. Under normal conditions, the physiologically important intracellular levels of reactive oxygen species (ROS) are maintained at low levels by various enzyme systems participating in the in vivo redox homeostasis. Therefore, oxidative stress can also be viewed as an imbalance between the prooxidants and antioxidants in the body. For the last two decades, oxidative stress has been one of the most burning topics among the biological researchers all over the world. Several reasons can be assigned to justify its importance: knowledge about reactive oxygen and nitrogen species production and metabolism; identification of biomarkers for oxidative damage; evidence relating manifestation of chronic and some acute health problems to oxidative stress; identification of various dietary antioxidants present in plant foods as bioactive molecules; and so on. This review discusses the importance of oxidative stress in the body growth and development as well as proteomic and genomic evidences of its relationship with disease development, incidence of malignancies and autoimmune disorders, increased susceptibility to bacterial, viral, and parasitic diseases, and an interplay with prooxidants and antioxidants for maintaining a sound health, which would be helpful in enhancing the knowledge of any biochemist, pathophysiologist, or medical personnel regarding this important issue.

Qing J. Wu,  Jianlin Wu,  A S Attele … (1999)
Ginseng is a highly valued herb in the Far East and has gained popularity in the West during the last decade. There is extensive literature on the beneficial effects of ginseng and its constituents. The major active components of ginseng are ginsenosides, a diverse group of steroidal saponins, which demonstrate the ability to target a myriad of tissues, producing an array of pharmacological responses. However, many mechanisms of ginsenoside activity still remain unknown. Since ginsenosides and other constituents of ginseng produce effects that are different from one another, and a single ginsenoside initiates multiple actions in the same tissue, the overall pharmacology of ginseng is complex. The ability of ginsenosides to independently target multireceptor systems at the plasma membrane, as well as to activate intracellular steroid receptors, may explain some pharmacological effects. This commentary aims to review selected effects of ginseng and ginsenosides and describe their possible modes of action. Structural variability of ginsenosides, structural and functional relationship to steroids, and potential targets of action are discussed.

Specific aquaporins facilitate the diffusion of hydrogen peroxide across membranes.

Alexander Schulz,  Anders L B Møller,  P Jahn … (2007)
The metabolism of aerobic organisms continuously produces reactive oxygen species. Although potentially toxic, these compounds also function in signaling. One important feature of signaling compounds is their ability to move between different compartments, e.g. to cross membranes. Here we present evidence that aquaporins can channel hydrogen peroxide (H2O2). Twenty-four aquaporins from plants and mammals were screened in five yeast strains differing in sensitivity toward oxidative stress. Expression of human AQP8 and plant Arabidopsis TIP1;1 and TIP1;2 in yeast decreased growth and survival in the presence of H2O2. Further evidence for aquaporin-mediated H2O2 diffusion was obtained by a fluorescence assay with intact yeast cells using an intracellular reactive oxygen species-sensitive fluorescent dye. Application of silver ions (Ag+), which block aquaporin-mediated water diffusion in a fast kinetics swelling assay, also reversed both the aquaporin-dependent growth repression and the H2O2-induced fluorescence. Our results present the first molecular genetic evidence for the diffusion of H2O2 through specific members of the aquaporin family.

Oxidative stress as a mediator of life history trade-offs: mechanisms, measurements and interpretation.

Neil Metcalfe,  Pat Monaghan,  Roxana Torres (2008)
The concept of trade-offs is central to our understanding of life-history evolution. The underlying mechanisms, however, have been little studied. Oxidative stress results from a mismatch between the production of damaging reactive oxygen species (ROS) and the organism's capacity to mitigate their damaging effects. Managing oxidative stress is likely to be a major determinant of life histories, as virtually all activities generate ROS. There is a recent burgeoning of interest in how oxidative stress is related to different components of animal performance. The emphasis to date has been on immediate or short-term effects, but there is an increasing realization that oxidative stress will influence life histories over longer time scales. The concept of oxidative stress is currently used somewhat loosely by many ecologists, and the erroneous assumption often made that dietary antioxidants are necessarily the major line of defence against ROS-induced damage. We summarize current knowledge on how oxidative stress occurs and the different methods for measuring it, and highlight where ecologists can be too simplistic in their approach. We critically review the potential role of oxidative stress in mediating life-history trade-offs, and present a framework for formulating appropriate hypotheses and guiding experimental design. We indicate throughout potentially fruitful areas for further research.