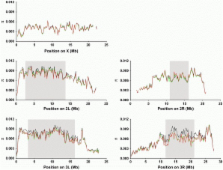 Understanding the genetic underpinnings of adaptive change is a fundamental but largely unresolved problem in evolutionary biology. Drosophila melanogaster, an ancestrally tropical insect that has spread to temperate regions and become cosmopolitan, offers a powerful opportunity for identifying the molecular polymorphisms underlying clinal adaptation. Here, we use genome-wide next-generation sequencing of DNA pools ('pool-seq') from three populations collected along the North American east coast to examine patterns of latitudinal differentiation. Comparing the genomes of these populations is particularly interesting since they exhibit clinal variation in a number of important life history traits. We find extensive latitudinal differentiation, with many of the most strongly differentiated genes involved in major functional pathways such as the insulin/TOR, ecdysone, torso, EGFR, TGFβ/BMP, JAK/STAT, immunity and circadian rhythm pathways. We observe particularly strong differentiation on chromosome 3R, especially within the cosmopolitan inversion In(3R)Payne, which contains a large number of clinally varying genes. While much of the differentiation might be driven by clinal differences in the frequency of In(3R)P, we also identify genes that are likely independent of this inversion. Our results provide genome-wide evidence consistent with pervasive spatially variable selection acting on numerous loci and pathways along the well-known North American cline, with many candidates implicated in life history regulation and exhibiting parallel differentiation along the previously investigated Australian cline.

Rasmus Nielsen (2005)
There is an increasing interest in detecting genes, or genomic regions, that have been targeted by natural selection. The interest stems from a basic desire to learn more about evolutionary processes in humans and other organisms, and from the realization that inferences regarding selection may provide important functional information. This review provides a nonmathematical description of the issues involved in detecting selection from DNA sequences and SNP data and is intended for readers who are not familiar with population genetic theory. Particular attention is placed on issues relating to the analysis of large-scale genomic data sets.

Patrik Nosil,  Daniel J. Funk,  Daniel Ortiz-Barrientos (2009)
Levels of genetic differentiation between populations can be highly variable across the genome, with divergent selection contributing to such heterogeneous genomic divergence. For example, loci under divergent selection and those tightly physically linked to them may exhibit stronger differentiation than neutral regions with weak or no linkage to such loci. Divergent selection can also increase genome-wide neutral differentiation by reducing gene flow (e.g. by causing ecological speciation), thus promoting divergence via the stochastic effects of genetic drift. These consequences of divergent selection are being reported in recently accumulating studies that identify: (i) 'outlier loci' with higher levels of divergence than expected under neutrality, and (ii) a positive association between the degree of adaptive phenotypic divergence and levels of molecular genetic differentiation across population pairs ['isolation by adaptation' (IBA)]. The latter pattern arises because as adaptive divergence increases, gene flow is reduced (thereby promoting drift) and genetic hitchhiking increased. Here, we review and integrate these previously disconnected concepts and literatures. We find that studies generally report 5-10% of loci to be outliers. These selected regions were often dispersed across the genome, commonly exhibited replicated divergence across different population pairs, and could sometimes be associated with specific ecological variables. IBA was not infrequently observed, even at neutral loci putatively unlinked to those under divergent selection. Overall, we conclude that divergent selection makes diverse contributions to heterogeneous genomic divergence. Nonetheless, the number, size, and distribution of genomic regions affected by selection varied substantially among studies, leading us to discuss the potential role of divergent selection in the growth of regions of differentiation (i.e. genomic islands of divergence), a topic in need of future investigation.

Charles Aquadro,  David Begun (1992)
Two genomic regions with unusually low recombination rates in Drosophila melanogaster have normal levels of divergence but greatly reduced nucleotide diversity, apparently resulting from the fixation of advantageous mutations and the associated hitch-hiking effect. Here we show that for 20 gene regions from across the genome, the amount of nucleotide diversity in natural populations of D. melanogaster is positively correlated with the regional rate of recombination. This cannot be explained by variation in mutation rates and/or functional constraint, because we observe no correlation between recombination rates and DNA sequence divergence between D. melanogaster and its sibling species, D. simulans. We suggest that the correlation may result from genetic hitch-hiking associated with the fixation of advantageous mutants. Hitch-hiking thus seems to occur over a large fraction of the Drosophila genome and may constitute a major constraint on levels of genetic variation in nature.