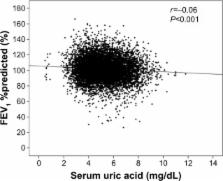 The prevalence of COPD and asthma is increasing all over the world; however, their morbidities are thought to be greatly underestimated because of unawareness of patients’ conditions and respiratory symptoms. Spirometry is useful for the early detection of COPD and asthma with airflow limitation (AL), although it is not yet widely used for screening in epidemiological and primary care settings. A simple predictive marker used in combination with spirometry for AL is expected to be established. In medical health check-ups, serum uric acid (s-UA) is measured when screening for gout and has recently been suggested to have an association with several respiratory disorders, including asthma and COPD. However, whether s-UA influences the development of AL remains unclear. Therefore, the aims of this study were to examine the relationship between AL and s-UA and to investigate s-UA as a potential auxiliary marker for predicting AL risk in medical health check-ups. A total of 8,662 subjects aged >40 years were included. They were administered a simple questionnaire and assessed using pulmonary function tests, blood pressure (BP) measurements, and blood samplings. One hundred and fifty-six subjects (1.8%) had AL, just 29% of whom had experienced respiratory symptoms. The subjects with AL had significantly higher s-UA levels compared with never-smoking subjects without AL. Forced expiratory volume in 1 second (FEV 1) %predicted showed significant correlations with age, smoking index, body mass index (BMI), mean BP, white blood cells, hemoglobin A1c, s-UA, and high-density lipoprotein cholesterol. In multiple logistic regression analysis, s-UA, in addition to age, smoking index, respiratory symptoms, and BMI, was independently associated with AL. In conclusion, elevated s-UA levels, together with respiratory symptoms, high smoking index, and weight loss, may epidemiologically predict the development of AL risk.

Impact of COPD in North America and Europe in 2000: subjects' perspective of Confronting COPD International Survey.

P Vermeire,  N Pride,  J Soriano … (2002)
To date, no international surveys estimating the burden of chronic obstructive pulmonary disease (COPD) in the general population have been published. The Confronting COPD International Survey aimed to quantify morbidity and burden in COPD subjects in 2000. From a total of 201,921 households screened by random-digit dialling in the USA, Canada, France, Italy, Germany, The Netherlands, Spain and the UK, 3,265 subjects with a diagnosis of COPD, chronic bronchitis or emphysema, or with symptoms of chronic bronchitis, were identified. The mean age of the subjects was 63.3 yrs and 44.2% were female. Subjects with COPD in North America and Europe appear to underestimate their morbidity, as shown by the high proportion of subjects with limitations to their basic daily life activities, frequent work loss (45.3% of COPD subjects of <65 yrs reported work loss in the past year) and frequent use of health services (13.8% of subjects required emergency care in the last year), and may be undertreated. There was a significant disparity between subjects' perception of disease severity and the degree of severity indicated by an objective breathlessness scale. Of those with the most severe breathlessness (too breathless to leave the house), 35.8% described their condition as mild or moderate, as did 60.3% of those with the next most severe degree of breathlessness (breathless after walking a few minutes on level ground). This international survey confirmed the great burden to society and high individual morbidity associated with chronic obstructive pulmonary disease in subjects in North America and Europe.

Isa Cerveri,  Benedicte Leynaert,  Josep M. Antó … (2007)
The few prospective studies aimed at assessing the incidence of chronic obstructive pulmonary disease (COPD) in relation to the presence of chronic cough/phlegm have produced contrasting results. To assess the incidence of COPD in a cohort of young adults and to test whether chronic cough/phlegm and dyspnea are independent predictors of COPD. An international cohort of 5,002 subjects without asthma (ages 20-44 yr) with normal lung function (FEV(1)/FVC ratio >/= 70%) from 12 countries was followed from 1991-2002 in the frame of the European Community Respiratory Health Survey II. Incident cases of COPD were those who had an FEV(1)/FVC ratio less than 70% at the end of the follow-up, but did not report having had a doctor diagnose asthma during the follow-up. The incidence rate of COPD was 2.8 cases/1,000/yr (95% confidence interval [CI], 2.3-3.3). Chronic cough/phlegm was an independent and statistically significant predictor of COPD (incidence rate ratio [IRR], 1.85; 95% CI, 1.17-2.93) after adjusting for smoking habits and other potential confounders, whereas dyspnea was not associated with the disease (IRR = 0.98; 95% CI, 0.64-1.50). Subjects who reported chronic cough/phlegm both at baseline and at the follow-up had a nearly threefold-increased risk of developing COPD with respect to asymptomatic subjects (IRR = 2.88; 95% CI, 1.44-5.79). The incidence of COPD is substantial even in young adults. The presence of chronic cough/phlegm identifies a subgroup of subjects with a high risk of developing COPD, independently of smoking habits.

Should we view chronic obstructive pulmonary disease differently after ECLIPSE? A clinical perspective from the study team.

Ruth Tal-Singer,  Nicholas Locantore,  Per S. Bakke … (2014)
Chronic obstructive pulmonary disease (COPD) seems to be a heterogeneous disease with a variable course. We wished to characterize the heterogeneity and variability of COPD longitudinally. In the Evaluation of COPD Longitudinally to Identify Predictive Surrogate Endpoints (ECLIPSE) study of 2,164 patients with clinically stable COPD, 337 smokers with normal lung function, and 245 never-smokers, we measured a large number of clinical parameters, lung function, exercise tolerance, biomarkers, and amount of emphysema by computed tomography. All three groups were followed for 3 years. We found a striking heterogeneity among patients with COPD, with poor correlations between FEV1, symptoms, quality of life, functional outcomes, and biomarkers. Presence of systemic inflammation was found in only a limited proportion of patients, and did not relate to baseline characteristics or disease progression, but added prognostic value for predicting mortality. Exacerbations tracked over time and added to the concept of the "frequent exacerbator phenotype." Disease course was very variable, with close to a third of patients not progressing at all. Risk factors for 3-year change in both FEV1 and lung density were assessed. For FEV1 decline, continued smoking and presence of emphysema were the strongest predictors of progression; club cell protein was found to be a potential biomarker for disease activity. For progression of emphysema, the strongest predictors were continued smoking and female sex. By following a large, well characterized cohort of patients with COPD over 3 years, we have a clearer picture of a heterogeneous disease with clinically important subtypes ("phenotypes") and a variable and not inherently progressive course. Clinical trial registered with www.clinicaltrials.gov (NCT00292552).