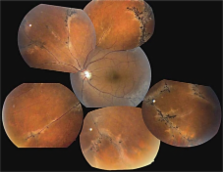 To describe a case of bilateral pigmented paravenous chorioretinal atrophy.

A 50-year-old female patient complained of right eye pain and decreased near visual acuity. She had a best-corrected visual acuity of 20/20 in both eyes. In the posterior segment, there were atrophic changes along retinal vessels, and bony spicule pigmentation was observed in a paravenous distribution. There were some abnormal changes in the electroretinogram and electrooculogram in both eyes.

A diagnosis of bilateral pigmented paravenous chorioretinal atrophy was made.

Pigmented paravenous chorioretinal atrophy is associated with a mutation within the crumbs homolog 1 (CRB1) gene.

David Simpson, Giuliana Silvestri, Jamie G. McKay … (2004)
Pigmented paravenous chorioretinal atrophy (PPCRA) is an unusual retinal degeneration characterized by accumulation of pigmentation along retinal veins. The purpose of this study was to describe the phenotype of a family with PPCRA, determine the mode of inheritance, and identify the causal mutation. Ophthalmic examination was performed on seven family members and serially detailed in the proband over a 3-year period. Blood samples were collected and DNA extracted. All 12 coding exons and the 5' promoter region of the crumbs homologue 1 (CRB1) gene were PCR amplified and DNA sequenced. In silico homology modeling was performed on the mutated protein domain. Subtle symmetrical chorioretinal atrophy in the inferior quadrant was the earliest clinical sign detectable within this family. Paravenous pigmentation occurred initially in the far periphery, progressing centrally, with atrophy later becoming more widespread, involving the nasal, then the temporal, and finally the upper quadrant. A novel, dominant Val162Met mutation within the fourth EGF-like domain of CRB1 cosegregates with the PPCRA phenotype. It is thought to affect domain structure, because codon 162 is involved in hydrogen bonding between the antiparallel beta-strands of the major beta-sheet, causing sufficient perturbation of the backbone that the domain-stabilizing hydrogen bond does not form or is weakened. PPCRA was dominantly inherited in this family, but exhibited variable expressivity. Males are more likely to exhibit a severe phenotype, whereas females may remain virtually asymptomatic even in later years. The PPCRA phenotype is associated with a Val162Met mutation in CRB1 which is likely to affect the structure of the CRB1 protein.

G Kirkby, Shauna Murray (2000)
Pigmented paravenous retinochoroidal atrophy (PPRCA) is a rare disorder of unknown origin characterised by bone corpuscle pigmentation accumulation along the distribution of the retinal veins. In addition there are peripapillary pigmentary changes as well as areas of chorioretinal atrophy adjacent to the perivenular pigmentary changes. The finding of PPRCA is usually incidental and does not affect vision. The literature regarding this condition is reviewed. Its natural course has been considered controversial. Observation of the initial insult leading to PPRCA has not previously been reported. A case that provides a photographic record over 20 years of the development of this condition from the initial insult, including the gradual development of the characteristic fundus appearance, is described. The initial presentation was with a sudden reduction of vision and gross diffuse macular oedema in one eye, which was rapidly followed by similar involvement of the fellow eye despite treatment. Thus it was possible to examine the patient at the stage of the initial insult, 5 years before the development of the typical and pathognomonic retinal changes of PPRCA. The clinical and electrophysiological findings are discussed, as also is the relevance of this case to the literature reviewed.

K Noble (1989)
Three male siblings, born of nonconsanguineous parents, manifested the characteristic paravenous bone spicule accumulation typically seen in pigmented paravenous chorioretinal atrophy. The wide range of fundus appearances was apparent. The electroretinogram confirmed a localized dystrophy, and an abnormal electro-oculogram in the least affected brother suggested a more widespread abnormality. The onset of the disorder in all three brothers was early in life (possibly congenital), and there was minimal, if any, progression. The mode of inheritance could not be established. Because some mildly affected individuals will be asymptomatic and have minimal fundus abnormalities, it is important to examine all family members when considering the diagnosis of pigmented paravenous chorioretinal atrophy.

This is an Open Access article distributed under the terms of the Creative Commons Attribution-Noncommercial-No-Derivative-Works License ( http://creativecommons.org/licenses/by-nc-nd/3.0/). Users may download, print and share this work on the Internet for noncommercial purposes only, provided the original work is properly cited, and a link to the original work on http://www.karger.com and the terms of this license are included in any shared versions.