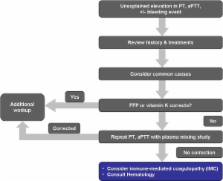 Topical hemostats, fibrin sealants, and surgical adhesives are regularly used in a variety of surgical procedures involving multiple disciplines. Generally, these adjuncts to surgical hemostasis are valuable means for improving wound visualization, reducing blood loss or adding tissue adherence; however, some of these agents are responsible for under-recognized adverse reactions and outcomes. Bovine thrombin, for example, is a topical hemostat with a long history of clinical application that is widely used alone or in combination with other hemostatic agents. Hematologists and coagulation experts are aware that these agents can lead to development of an immune-mediated coagulopathy (IMC). A paucity of data on the incidence of IMC contributes to under-recognition and leaves many surgeons unaware that this clinical entity, originating from normal immune responses to foreign antigen exposure, requires enhanced post-operative vigilance and judicious clinical judgment to achieve best outcomes.

Postoperative bleeding may result from issues such as loosened ties or clips or the occurrence of a coagulopathy due to hemodilution, vitamin K deficiency, disseminated intravascular coagulation (DIC) or post-transfusion, post-shock coagulopathic states. Other causes, such as liver disease, may be ruled out by a careful patient history and common pre-operative liver function tests. Less common are coagulopathies secondary to pathologic immune responses. Such coagulopathies include those that may result from inherent patient problems such as patients with an immune dysfunction related to systemic lupus erythrematosus (SLE) or lymphoma that can invoke antibodies against native coagulation factors. Medical interventions may also provoke antibody formation in the form of self-directed anti-coagulation factor antibodies, that result in problematic bleeding; it is these iatrogenic post-operative coagulopathies, including those associated with bovine thrombin exposure and its clinical context, that this panel was convened to address.

The RETACC panel's goal was to attain a logical consensus by reviewing the scientific evidence surrounding IMC and to make recommendations for the clinical recognition, diagnosis and evaluation, and clinical management of these complications. In light of the under-recognition and under-reporting of IMC, and given the associated morbidity, utilization of health care resources, and potential economic impact to hospitals, the panel engaged in a detailed review of peer-reviewed reports of bovine thrombin associated IMC. From that clinical knowledge base, recommendations were developed to guide clinicians in the recognition, diagnosis, and management of this challenging condition.

How to interpret and pursue an abnormal prothrombin time, activated partial thromboplastin time, and bleeding time in adults.

I H Kamal,  R Pruthi,  Ayalew Tefferi (2007)
The prothrombin time (PT) and activated partial thromboplastin time (APTT) are among the most commonly ordered coagulation tests. In 2005, more than 140,000 PT and more than 95,000 APTT tests were performed at Mayo Clinic. The most common indications for ordering these tests include anticoagulant monitoring, initial evaluation of hemorrhage, and, although not generally indicated, routine preoperative screening. In addition, the bleeding time (BT) test, which is infrequently performed, is still available in certain institutions. Abnormal results from these tests (prolonged PT, APTT, and BT), especially from tests conducted for initial evaluation of hemorrhage or for preoperative screening, may pose a diagnostic dilemma to the nonhematologist. We review the essential factors affecting test results; provide a practical approach to the evaluation of a prolonged PT, APTT, and BT; and offer suggestions on which reflexive tests are appropriate and when to consider a subspecialty consultation.

A phase 3, randomized, double-blind comparative study of the efficacy and safety of topical recombinant human thrombin and bovine thrombin in surgical hemostasis.

Michael F Weaver,  Yuri S Genyk,  Kenneth Renkens … (2007)
Plasma-derived bovine thrombin is used as a topical agent to improve surgical hemostasis, but development of antibodies to bovine hemostatic proteins has been associated with increased bleeding and thrombotic complications. Recombinant human thrombin could reduce the risk of these complications. The objective of this randomized, double-blind, comparative trial was to compare the efficacy, safety, and antigenicity of recombinant human thrombin (rhThrombin) and bovine thrombin as adjuncts to hemostasis in liver resection, spine, peripheral arterial bypass, and dialysis access surgery. Blinded study drug was applied topically to bleeding sites with an absorbable gelatin sponge. The primary efficacy end point was time to hemostasis, summarized as the incidence of hemostasis within 10 minutes. Safety analyses were conducted for 1 month after operation, and the development of antibodies to rhThrombin or to the bovine product was evaluated. Four hundred one patients completed this trial. Hemostasis was achieved at the time-to-hemostasis evaluation site within 10 minutes in 95% of patients in each treatment group. Overall complications, including operative mortality, adverse events, and laboratory abnormalities, were similar between groups. Forty-three (21.5%) patients receiving bovine thrombin developed antibodies to the product; three patients (1.5%; p < 0.0001) in the rhThrombin group developed antibodies to rhThrombin. None of the three patients who developed antirhThrombin antibodies had abnormal coagulation laboratory results or bleeding, thromboembolic, or hypersensitivity events. Results of this trial suggest that rhThrombin has comparable efficacy, a similar safety profile, and is considerably less immunogenic than bovine thrombin when used for surgical hemostasis.

The clinical use and immunologic impact of thrombin in surgery.

Anthony Lawson (2006)
Thrombin is a naturally derived enzyme that has been widely characterized for its roles in hemostasis, inflammation, and cell signaling. Thrombin has been purified from numerous sources and used as a clinical aid for topical hemostasis for more than 60 years. Due to both its ease of use and apparent effectiveness, thrombin has become used routinely as an aid for topical hemostasis in nearly all types of surgical procedures, including but not limited to cardiovascular, orthopedic, neurologic, general, gynecologic, and dental procedures. Due to the widespread acceptance of thrombin in the surgical setting, it is conservatively estimated that at least 1 million patients in the United States are treated with topical applications of thrombin each year. Although the U.S. Food and Drug Administration (FDA) has approved a wide array of topical and biologic products to stop surgical bleeding, the only thrombin that is currently FDA approved as a stand-alone hemostatic product in the United States is derived from bovine sources. Bovine-derived thrombin has potent biologic activity in its ability to convert fibrinogen to fibrin, activate platelets, and induce vascular contraction. However, it has also been shown to induce a robust immune response following human exposure. Numerous reports have documented an array of clinical events that follow bovine thrombin exposure, which include the development of antibodies against thrombin, prothrombin, factor V, and cardiolipin. In some well-described cases, these antibodies have led to clinical syndromes that range from severe postoperative bleeding to high rates of vascular bypass graft thrombosis. Furthermore, experimental applications of bovine thrombin to various strains of mice have induced a postexposure autoimmune syndrome that was pathologically identical to lupus. Thrombin-derived products are well accepted by the surgical community for use as an aid for hemostasis, but the bovine-derived products have an unacceptably high and unnecessary association with immunologic side effects. If a nonimmunologic and effective thrombin were developed, one would expect it to be rapidly adopted by the clinical community.