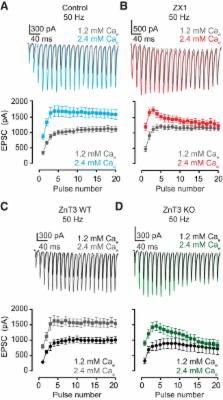 Synaptically released zinc inhibits baseline excitatory neurotransmission; however, the role of this neuromodulator on short-term plasticity during different levels of synaptic activity remains largely unknown. This lack of knowledge prevents our understanding of information transfer across zinc-releasing synapses, including 50% of excitatory synapses in cortical areas. We used in vitro electrophysiology in mouse brain slices and discovered that the effects of zinc on excitatory postsynaptic current (EPSC) amplitudes are context-dependent. At lower frequencies of activity, synaptically released zinc reduces EPSC amplitudes. In contrast, at higher stimulation frequencies and vesicular release probability (Pr), zinc inhibits EPSC amplitudes during the first few stimuli but leads to enhanced steady-state EPSC amplitudes during subsequent stimuli. This paradoxical enhancement is due to zinc-dependent potentiation of synaptic facilitation via the recruitment of endocannabinoid signaling. Together, these findings demonstrate that synaptically released zinc is a modulator of excitatory short-term plasticity, which shapes information transfer among excitatory synapses.

Robert S. Zucker, Wade Regehr (2002)
Synaptic transmission is a dynamic process. Postsynaptic responses wax and wane as presynaptic activity evolves. This prominent characteristic of chemical synaptic transmission is a crucial determinant of the response properties of synapses and, in turn, of the stimulus properties selected by neural networks and of the patterns of activity generated by those networks. This review focuses on synaptic changes that result from prior activity in the synapse under study, and is restricted to short-term effects that last for at most a few minutes. Forms of synaptic enhancement, such as facilitation, augmentation, and post-tetanic potentiation, are usually attributed to effects of a residual elevation in presynaptic [Ca(2+)]i, acting on one or more molecular targets that appear to be distinct from the secretory trigger responsible for fast exocytosis and phasic release of transmitter to single action potentials. We discuss the evidence for this hypothesis, and the origins of the different kinetic phases of synaptic enhancement, as well as the interpretation of statistical changes in transmitter release and roles played by other factors such as alterations in presynaptic Ca(2+) influx or postsynaptic levels of [Ca(2+)]i. Synaptic depression dominates enhancement at many synapses. Depression is usually attributed to depletion of some pool of readily releasable vesicles, and various forms of the depletion model are discussed. Depression can also arise from feedback activation of presynaptic receptors and from postsynaptic processes such as receptor desensitization. In addition, glial-neuronal interactions can contribute to short-term synaptic plasticity. Finally, we summarize the recent literature on putative molecular players in synaptic plasticity and the effects of genetic manipulations and other modulatory influences.

L. Abbott, Wade Regehr (2004)
Neurons are often considered to be the computational engines of the brain, with synapses acting solely as conveyers of information. But the diverse types of synaptic plasticity and the range of timescales over which they operate suggest that synapses have a more active role in information processing. Long-term changes in the transmission properties of synapses provide a physiological substrate for learning and memory, whereas short-term changes support a variety of computations. By expressing several forms of synaptic plasticity, a single neuron can convey an array of different signals to the neural circuit in which it operates.

The neurobiology of zinc in health and disease.

Christopher Frederickson, Jae-Young Koh, Ashley Bush (2005)
The use of zinc in medicinal skin cream was mentioned in Egyptian papyri from 2000 BC (for example, the Smith Papyrus), and zinc has apparently been used fairly steadily throughout Roman and modern times (for example, as the American lotion named for its zinc ore, 'Calamine'). It is, therefore, somewhat ironic that zinc is a relatively late addition to the pantheon of signal ions in biology and medicine. However, the number of biological functions, health implications and pharmacological targets that are emerging for zinc indicate that it might turn out to be 'the calcium of the twenty-first century'.

Departments of Otolaryngology and Neurobiology, University of Pittsburgh , Pittsburgh, PA 15261

Authors report no conflict of interest.

This is an open-access article distributed under the terms of the Creative Commons Attribution 4.0 International, which permits unrestricted use, distribution and reproduction in any medium provided that the original work is properly attributed.