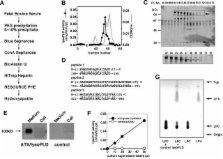 Autotaxin (ATX) is a tumor cell motility–stimulating factor, originally isolated from melanoma cell supernatants. ATX had been proposed to mediate its effects through 5′-nucleotide pyrophosphatase and phosphodiesterase activities. However, the ATX substrate mediating the increase in cellular motility remains to be identified. Here, we demonstrated that lysophospholipase D (lysoPLD) purified from fetal bovine serum, which catalyzes the production of the bioactive phospholipid mediator, lysophosphatidic acid (LPA), from lysophosphatidylcholine (LPC), is identical to ATX. The Km value of ATX for LPC was 25-fold lower than that for the synthetic nucleoside substrate, p-nitrophenyl-tri-monophosphate. LPA mediates multiple biological functions including cytoskeletal reorganization, chemotaxis, and cell growth through activation of specific G protein–coupled receptors. Recombinant ATX, particularly in the presence of LPC, dramatically increased chemotaxis and proliferation of multiple different cell lines. Moreover, we demonstrate that several cancer cell lines release significant amounts of LPC, a substrate for ATX, into the culture medium. The demonstration that ATX and lysoPLD are identical suggests that autocrine or paracrine production of LPA contributes to tumor cell motility, survival, and proliferation. It also provides potential novel targets for therapy of pathophysiological states including cancer.

A rapid method of total lipid extraction and purification.

L Liotta, E Schiffmann, E Unsworth … (1992)
Autotaxin (ATX) is a potent human motility-stimulating protein that has been identified in the conditioned medium from A2058 melanoma cells. This protein has been purified to homogeneity utilizing a strategy involving five column steps. Homogeneity of ATX was verified by two-dimensional gel electrophoresis. The molecular size of ATX is 125 kDa, and it has an isoelectric point of 7.7 +/- 0.2. Purified ATX was digested with cyanogen bromide and trypsin, and the resulting ATX peptides were purified by reverse-phase high performance liquid chromatography. Eleven peptides were subjected to amino acid sequence analysis, and 114 residues were identified. The partial amino acid sequences and the amino acid composition obtained for ATX show that it does not exhibit any significant homology to known growth factors or previously described motility factors. At picomolar concentrations, ATX stimulates both random and directed migration of human A2058 melanoma cells. Pretreatment of the melanoma cells with pertussis toxin abolishes the response to purified ATX, indicating that ATX stimulates motility through a receptor acting via a pertussis toxin-sensitive G protein.

Mutation in Npps in a mouse model of ossification of the posterior longitudinal ligament of the spine.

A Okawa, I. Nakamura, S. Goto … (1998)
Ossification of the posterior longitudinal ligament of the spine (OPLL) is a common form of human myelopathy caused by a compression of the spinal cord by ectopic ossification of spinal ligaments. To elucidate the genetic basis for OPLL, we have been studying the ttw (tiptoe walking; previously designated twy) mouse, a naturally occurring mutant which exhibits ossification of the spinal ligaments very similar to human OPLL (refs 3,4). Using a positional candidate-gene approach, we determined the ttw phenotype is caused by a nonsense mutation (glycine 568 to stop) in the Npps gene which encodes nucleotide pyrophosphatase. This enzyme regulates soft-tissue calcification and bone mineralization by producing inorganic pyrophosphate, a major inhibitor of calcification. The accelerated bone formation characteristic of ttw mice is likely to result from dysfunction of NPPS caused by predicted truncation of the gene product, resulting in the loss of more than one-third of the native protein. Our results may lead to novel insights into the mechanism of ectopic ossification and the aetiology of human OPLL.