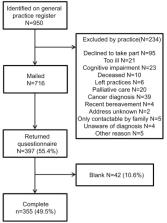 Background: Depression is common in people with chronic obstructive pulmonary disease (COPD) and has been associated with a variety of poor outcomes. A large proportion of health care costs in the UK are spent on emergency care. This study examined the prospective relationship between depression and use of emergency care in patients with COPD managed in primary care.

Methods: This was a twelve-month, prospective longitudinal study of 355 patients with COPD in six primary care practices in the UK. Baseline measures included demographic characteristics, depression and anxiety, severity of COPD, presence or absence of other chronic diseases, and prior use of emergency care. Outcome measures were (a) number of emergency department (ED) visits; or (b) an emergency hospital admission in the follow-up year.

Conclusion: Depression is a predictor of emergency care in COPD, independent of severity of disease or physical comorbidity. Even mild (subthreshold) symptoms of depression more than double the risk of using emergency care, suggesting there is a strong case to develop and deploy integrated preventive strategies in primary care that can promote mental health in people with COPD.

The Hospital Anxiety and Depression Scale: a diagnostic meta-analysis of case-finding ability.

Cathy Brennan,  Anne Worrall-Davies,  Dean McMillan … (2010)
To quantify the accuracy of the Hospital Anxiety and Depression Scale (HADS) as a case-finding instrument for anxiety and depressive disorders. MEDLINE, PSYCHINFO, EMBASE, CINAHL, BNI, and AMED were searched from January 1983 to June 2006. Studies were included that administered the HADS, used a standardized psychiatric interview to establish a diagnosis of anxiety or depression, and provided sufficient data on sensitivity and specificity (N=41). Summary sensitivity, specificity, likelihood ratios, and diagnostic odds ratios were calculated for each study. Random effects meta-analytic pooling across studies at the recommended clinical (7/8) and research (10/11) cutoff points was undertaken and summary receiver operating characteristic curves constructed. For major depressive disorders, a cut point of ≥8 gave a sensitivity of 0.82 (95% CI, 0.73-0.89) and a specificity of 0.74 (95% CI, 0.60-0.84) and a cut point ≥11 gave a sensitivity of 0.56 (95% CI, 0.40-0.71) and a specificity of 0.92 (95% CI, 0.79-0.97). Many studies have shown that the HADS is a useful screening tool to identify emotional distress in nonpsychiatric patients. However, it does not appear to be superior to other screening instruments in terms of identifying specific mental disorders in physical health settings. Copyright © 2010 Elsevier Inc. All rights reserved.

The cost of moderate and severe COPD exacerbations to the Canadian healthcare system.

N. Mittmann,  L Kuramoto,  C Bradley … (2008)
The cost of exacerbations in chronic obstructive pulmonary disease (COPD) has not been well studied. The aim of this study was to identify and quantify the (average) cost of moderate and severe exacerbations (ME and SE, respectively) from a Canadian perspective. Resources used during ME and SE were identified in a year long prospective, observational study (Resource Utilization Study In COPD (RUSIC)). The units of analysis were ME and SE. Unit costs (2006$CAN), based on provincial, hospital and published sources, were applied to resources. The overall cost per ME and SE were calculated. The population burden of exacerbations was also calculated. Among study participants (N=609, aged 68.6+/-9.4 years, 58.3% male) there were 790 exacerbations: 639 (80.9%) MEs and 151 (19.1%) SEs. Of the 790 exacerbations, 618 (78.2%), 245 (31.0%) and 151 (19.1%) included a visit to an outpatient clinic, emergency department (ED) or hospital, respectively. For ME, 85.9% and 13.1% involved visits to GPs and respirologists, respectively. Pharmacologic treatment changes in the outpatient setting involved antibiotics (63.1%) and corticosteroids (34.7%). The overall mean costs for outpatient and ED services for MEs were $126 (N=574) and $515 (N=105), respectively. The average overall cost of a ME was $641. For SEs, the average hospital stay was 10.0 days. The overall mean costs of outpatient, ED and hospitalization services for SE were $114 (N=44), $774 (N=140) and $8669 (N=151), respectively. The average overall cost of a SE was $9557. The economic burden associated with MEs and especially SEs, in Canada, is considerable and likely has a substantial impact on healthcare costs. The overall burden of exacerbations has been estimated in the range of $646 million to $736 million per annum.

Associations of depression and anxiety with gender, age, health-related quality of life and symptoms in primary care COPD patients.

Jennifer Cleland,  Susan Hall,  Jong-Min Lee … (2007)
Under-diagnosis of anxiety and depression in Chronic Obstructive Pulmonary Disease (COPD) patients may have a negative impact on patient quality of life and result in disparity between prevalence and the recognition and treatment of these symptoms. To reveal associations of depression and anxiety with demographic, health-related quality of life and clinical characteristics of COPD patients seen in UK primary care. Cross-sectional population-based postal survey of COPD patients comprising the EQ-5D visual analogue scale (EQ-5D(VAS)), the COPD symptom control questionnaire, the Hospital Anxiety and Depression Scale, the Medical Research Council dyspnea index. Demographic and spirometric data were collected from general practice records. A total of 170 (57%) patients consented to take part. Data are reported on 110 of these patients for whom up-to-date spirometry was available. Approximately one in five participants reported 'caseness' for depression (20.8%) and one in three reported anxiety (32.7%). Age and high levels of symptoms were independent predictors of anxiety and depression, as was the EQ-5D(VAS) of depression. These data suggest that in UK primary care, depressive and anxious symptoms in COPD are related to age and high levels of symptoms. Depression is also associated with lower patient-reported generic health status. The data suggest that assessment and treatment for depression and anxiety should be considered for all COPD patients, not just those with more severe clinical levels of disease. The potential of the EQ-5D(VAS) as a screening tool for anxiety and depression in primary care COPD patients also merits study.