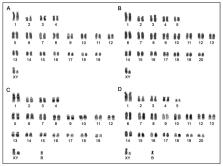 The genus Crocidura represents a remarkable model for the study of chromosome evolution. This is the case of the lesser white-toothed shrew ( Crocidura suaveolens), a representative of the Palearctic group. Although continuously distributed from Siberia to Central Europe, C. suaveolens is a rare, habitat-specialist species in the southwesternmost limit of its distributional range, in the Gulf of Cádiz (Iberian Peninsula). In this area, C. suaveolens is restricted to genetically isolated populations associated to the tidal marches of five rivers (Guadiana, Piedras, Odiel, Tinto and Guadalquivir). This particular distributional range provides a unique opportunity to investigate whether genetic differentiation and habitat specialization was accompanied by chromosomal variation. In this context, the main objective of this study was to determinate the chromosomal characteristics of the habitat-specialist C. suaveolens in Southwestern Iberia, as a way to understand the evolutionary history of this species in the Iberian Peninsula. A total of 41 individuals from six different populations across the Gulf of Cádiz were collected and cytogenetically characterized. We detected four different karyotypes, with diploid numbers (2n) ranging from 2n = 40 to 2n = 43. Two of them (2n = 41 and 2n = 43) were characterized by the presence of B-chromosomes. The analysis of karyotype distribution across lineages and populations revealed an association between mtDNA population divergence and chromosomal differentiation. C. suaveolens populations in the Gulf of Cádiz provide a rare example of true karyotypic polymorphism potentially associated to genetic isolation and habitat specialization in which to investigate the evolutionary significance of chromosomal variation in mammals and their contribution to phenotypic and ecological divergence.

Gauthier Dobigny, Janice Britton-Davidian, Terence Robinson (2017)
Although chromosome rearrangements (CRs) are central to studies of genome evolution, our understanding of the evolutionary consequences of the early stages of karyotypic differentiation (i.e. polymorphism), especially the non-meiotic impacts, is surprisingly limited. We review the available data on chromosomal polymorphisms in mammals so as to identify taxa that hold promise for developing a more comprehensive understanding of chromosomal change. In doing so, we address several key questions: (i) to what extent are mammalian karyotypes polymorphic, and what types of rearrangements are principally involved? (ii) Are some mammalian lineages more prone to chromosomal polymorphism than others? More specifically, do (karyotypically) polymorphic mammalian species belong to lineages that are also characterized by past, extensive karyotype repatterning? (iii) How long can chromosomal polymorphisms persist in mammals? We discuss the evolutionary implications of these questions and propose several research avenues that may shed light on the role of chromosome change in the diversification of mammalian populations and species.

Eva M. Farré, José A. Herrera, Philip J A Robinson (2011)
This review summarizes aspects of the extensive literature on the patterns and processes underpinning chromosomal evolution in vertebrates and especially placental mammals. It highlights the growing synergy between molecular cytogenetics and comparative genomics, particularly with respect to fully or partially sequenced genomes, and provides novel insights into changes in chromosome number and structure across deep division of the vertebrate tree of life. The examination of basal numbers in the deeper branches of the vertebrate tree suggest a haploid (n) chromosome number of 10-13 in an ancestral vertebrate, with modest increases in tetrapods and amniotes most probably by chromosomal fissioning. Information drawn largely from cross-species chromosome painting in the data-dense Placentalia permits the confident reconstruction of an ancestral karyotype comprising n=23 chromosomes that is similarly retained in Boreoeutheria. Using in silico genome-wide scans that include the newly released frog genome we show that of the nine ancient syntenies detected in conserved karyotypes of extant placentals (thought likely to reflect the structure of ancestral chromosomes), the human syntenic segmental associations 3p/21, 4pq/8p, 7a/16p, 14/15, 12qt/22q and 12pq/22qt predate the divergence of tetrapods. These findings underscore the enhanced quality of ancestral reconstructions based on the integrative molecular cytogenetic and comparative genomic approaches that collectively highlight a pattern of conserved syntenic associations that extends back ∼360 million years ago.