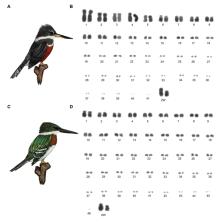 Kingfishers comprise about 115 species of the family Alcedinidae , and are an interesting group for cytogenetic studies, for they are among birds with most heterogeneous karyotypes. However, cytogenetics knowledge in Kingfishers is extremely limited. Thus, the aim of this study was to describe the karyotype structure of the Ringed Kingfisher ( Megaceryle torquata Linnaeus, 1766) and Green Kingfisher ( Chloroceryle americana Gmelin, 1788) and also compare them with related species in order to identify chromosomal rearrangements. The Ringed Kingfisher presented 2n = 84 and the Green Kingfisher had 2n = 94. The increase of the chromosome number in the Green Kingfisher possibly originated by centric fissions in macrochromosomes. In addition, karyotype comparisons in Alcedinidae show a heterogeneity in the size and morphology of macrochromosomes, and chromosome numbers ranging from 2n = 76 to 132. Thus, it is possible chromosomal fissions in macrochromosomes resulted in the increase of the diploid number, whereas chromosome fusions have originated the karyotypes with low diploid number.

Bryan D. Griffin,  Murray A Skinner (2011)
It is generally believed that the organization of avian genomes remains highly conserved in evolution as chromosome number is constant and comparative chromosome painting demonstrated there to be very few interchromosomal rearrangements. The recent sequencing of the zebra finch (Taeniopygia guttata) genome allowed an assessment of the number of intrachromosomal rearrangements between it and the chicken (Gallus gallus) genome, revealing a surprisingly high number of intrachromosomal rearrangements. With the publication of the turkey (Meleagris gallopavo) genome it has become possible to describe intrachromosomal rearrangements between these three important avian species, gain insight into the direction of evolutionary change and assess whether breakpoint regions are reused in birds. To this end, we aligned entire chromosomes between chicken, turkey and zebra finch, identifying syntenic blocks of at least 250 kb. Potential optimal pathways of rearrangements between each of the three genomes were determined, as was a potential Galliform ancestral organization. From this, our data suggest that around one-third of chromosomal breakpoint regions may recur during avian evolution, with 10% of breakpoints apparently recurring in different lineages. This agrees with our previous hypothesis that mechanisms of genome evolution are driven by hotspots of non-allelic homologous recombination.

Dynamics of vertebrate sex chromosome evolution: from equal size to giants and dwarfs.

Michael Schmid,  Manfred Schartl,  Indrajit Nanda (2016)
The Y and W chromosomes of mammals and birds are known to be small because most of their genetic content degenerated and were lost due to absence of recombination with the X or Z, respectively. Thus, a picture has emerged of ever-shrinking Ys and Ws that may finally even fade into disappearance. We review here the large amount of literature on sex chromosomes in vertebrate species and find by taking a closer look, particularly at the sex chromosomes of fishes, amphibians and reptiles where several groups have evolutionary younger chromosomes than those of mammals and birds, that the perception of sex chromosomes being doomed to size reduction is incomplete. Here, sex-determining mechanisms show a high turnover and new sex chromosomes appear repeatedly. In many species, Ys and Ws are larger than their X and Z counterparts. This brings up intriguing perspectives regarding the evolutionary dynamics of sex chromosomes. It can be concluded that, due to accumulation of repetitive DNA and transposons, the Y and W chromosomes can increase in size during the initial phase of their differentiation.