Five new species of Dolichomitus Smith from the tropical Andes, with a key for the South American species (Hymenoptera, Ichneumonidae, Pimplinae) 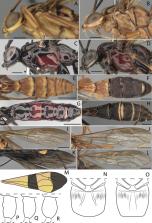 Phylogeny of the subfamilies of Ichneumonidae (Hymenoptera)

Andrew Bennett,  Sophie Cardinal,  Ian Gauld … (2019)
A combined morphological and molecular phylogenetic analysis was performed to evaluate the subfamily relationships of the parasitoid wasp family Ichneumonidae (Hymenoptera). Data were obtained by coding 135 morphological and 6 biological characters for 131 exemplar species of ichneumonids and 3 species of Braconidae (the latter as outgroups). The species of ichneumonids represent all of the 42 currently recognized subfamilies. In addition, molecular sequence data (cytochrome oxidase I “DNA barcoding” region, the D2 region of 28S rDNA and part of the F2 copy of elongation factor 1-alpha) were obtained from specimens of the same species that were coded for morphology (1309 base pairs total). The data were analyzed using parsimony and Bayesian analyses. The parsimony analysis using all data recovered previously recognized informal subfamily groupings (Pimpliformes, Ophioniformes, Ichneumoniformes), although the relationships of these three groups to each other differed from previous studies and some of the subfamily relationships within these groupings had not previously been suggested. Specifically, Ophioniformes was the sister group to (Ichneumoniformes + Pimplformes), and Labeninae was placed near Ichneumoniformes, not as sister group to all Ichneumonidae except Xoridinae. The parsimony analysis using only morphological characters was poorly resolved and did not recover any of the three informal subfamily groupings and very few of the relationships were similar to the total-evidence parsimony analysis. The molecular-only parsimony analysis and both Bayesian analyses (total-evidence and molecular-only) recovered Pimpliformes, a restricted Ichneumoniformes grouping and many of the subfamily groupings recovered in the total-evidence parsimony analysis. A comparison and discussion of the results obtained by each phylogenetic method and different data sets is provided. It is concluded that the molecular characters produced results that were relatively consistent with traditional, non-phylogenetic concepts of relationships between the ichneumonid subfamilies, whereas the morphological characters did not (at least not by themselves). The inclusion of both molecular and morphological characters using parsimony produced a topology that was the closest to the traditional subfamily relationships. The method of analysis did not greatly affect the overall topology for the molecular-only analyses, but there were differences between Bayesian and parsimony results for the total-evidence analyses (especially near the root of the tree). The Bayesian results did not seem to be altered very much by the inclusion of morphological characters, unlike in the parsimony analysis. In summary, the following groups were supported in multiple analyses regardless of the characters used or method of tree-building: Pimpliformes, higher Ophioniformes, higher Pimpliformes, (Claseinae + Pedunculinae), (Banchinae + Stilbopinae), Campopleginae, Cremastinae, Diplazontinae, Ichneumoninae (including Alomya ), Labeninae, Ophioninae, Poemeniinae, Rhyssinae, and Tersilochinae sensu stricto. Conversely, Ctenopelmatinae and Tryphoninae were never recovered without inclusion of other taxa. Based on the hypothesis of relationships obtained by the total-evidence parsimony analysis, the following formal taxonomic changes are proposed: Alomyinae Förster (= Alomya Panzer and Megalomya Uchida) is once again synonymized with Ichneumoninae and is now considered a tribe (Alomyini rev. stat. ); and Notostilbops Townes is transferred from Stilbopinae to Banchinae, tribe Atrophini.

The Ichneumonidae of Costa Rica I.