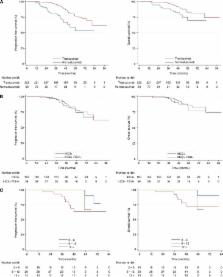 Adjuvant trastuzumab with chemotherapy is standard treatment for HER2-positive breast cancer, defined as either HER2 IHC3+ or IHC2+ and FISH amplified. The aim of this study was to investigate the degree to which HER2 amplification in terms of HER2 gene copy numbers in HER2+IHC2+ cancers affected the outcome in a community setting.

High HER2 copy number (>12) appears to be associated with consistently better response compared with patients with intermediate HER2 copy numbers (6–12). In light of emerging data of patients showing insensivity to trastuzumab therapy, we propose that the HER2 gene copy number value should be included as an additional indicator for stratifying both the management and the follow-up of breast cancer patients.

HER2 status and benefit from adjuvant trastuzumab in breast cancer.

Disease-free survival according to degree of HER2 amplification for patients treated with adjuvant chemotherapy with or without 1 year of trastuzumab: the HERA Trial.

James Brian Jones,  Worta McCaskill-Stevens,  Giuseppe Viale … (2009)
To determine whether (1) immunohistochemical (IHC) HER2 status (ie, 2+ or 3+), (2) degree of fluorescence in situ hybridization (FISH) amplification according to (2a) HER2/CEP17 ratio or (2b) HER2 gene copy number, or (3) polysomy significantly influenced clinical outcome for patients with human epidermal growth factor receptor 2 (HER2) -positive breast cancer enrolled in the Herceptin Adjuvant trial of trastuzumab versus no trastuzumab administered after completion of chemotherapy. IHC and/or FISH analyses were performed locally and required central confirmation as indicating HER2 positivity for trial entry. FISH data from the central HER2 analysis on patients in the 1-year trastuzumab and no trastuzumab arms were assessed in relation to disease-free survival (DFS) after a median 2 years of follow-up. Central FISH results were available for 2,071 (61%) of the 3,401 patients randomized to the 2 arms. Among patients with FISH-positive disease, (1) the hazard ratios for trastuzumab versus no trastuzumab were 0.56 (95% CI, 0.32 to 0.99) for locally IHC2+ cases (n = 340) and 0.80 (95% CI, 0.40 to 1.61) for centrally IHC2+ cases (n = 299). There was no significant prognostic relationship between (2a) HER2 FISH ratio, (2b) HER2 copy number, or (3) polysomy and DFS in the control arm or predictive relationship defining differential benefit from trastuzumab. There was no evidence for reduced benefit of trastuzumab in HER2 IHC2+FISH+ cases. The degree of HER2 amplification does not influence prognosis or benefit from adjuvant trastuzumab in patients treated with prior adjuvant chemotherapy.

From twelve months after its original publication, this work is licensed under the Creative Commons Attribution-NonCommercial-Share Alike 3.0 Unported License. To view a copy of this license, visit http://creativecommons.org/licenses/by-nc-sa/3.0/