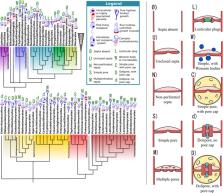 The question of how phenotypic and genomic complexity are inter‐related and how they are shaped through evolution is a central question in biology that historically has been approached from the perspective of animals and plants. In recent years, however, fungi have emerged as a promising alternative system to address such questions. Key to their ecological success, fungi present a broad and diverse range of phenotypic traits. Fungal cells can adopt many different shapes, often within a single species, providing them with great adaptive potential. Fungal cellular organizations span from unicellular forms to complex, macroscopic multicellularity, with multiple transitions to higher or lower levels of cellular complexity occurring throughout the evolutionary history of fungi. Similarly, fungal genomes are very diverse in their architecture. Deep changes in genome organization can occur very quickly, and these phenomena are known to mediate rapid adaptations to environmental changes. Finally, the biochemical complexity of fungi is huge, particularly with regard to their secondary metabolites, chemical products that mediate many aspects of fungal biology, including ecological interactions. Herein, we explore how the interplay of these cellular, genomic and metabolic traits mediates the emergence of complex phenotypes, and how this complexity is shaped throughout the evolutionary history of Fungi.

Insights from the genome of the biotrophic fungal plant pathogen Ustilago maydis.

Michael Perlin,  William Holloman,  Robert J. Klose … (2006)
Ustilago maydis is a ubiquitous pathogen of maize and a well-established model organism for the study of plant-microbe interactions. This basidiomycete fungus does not use aggressive virulence strategies to kill its host. U. maydis belongs to the group of biotrophic parasites (the smuts) that depend on living tissue for proliferation and development. Here we report the genome sequence for a member of this economically important group of biotrophic fungi. The 20.5-million-base U. maydis genome assembly contains 6,902 predicted protein-encoding genes and lacks pathogenicity signatures found in the genomes of aggressive pathogenic fungi, for example a battery of cell-wall-degrading enzymes. However, we detected unexpected genomic features responsible for the pathogenicity of this organism. Specifically, we found 12 clusters of genes encoding small secreted proteins with unknown function. A significant fraction of these genes exists in small gene families. Expression analysis showed that most of the genes contained in these clusters are regulated together and induced in infected tissue. Deletion of individual clusters altered the virulence of U. maydis in five cases, ranging from a complete lack of symptoms to hypervirulence. Despite years of research into the mechanism of pathogenicity in U. maydis, no 'true' virulence factors had been previously identified. Thus, the discovery of the secreted protein gene clusters and the functional demonstration of their decisive role in the infection process illuminate previously unknown mechanisms of pathogenicity operating in biotrophic fungi. Genomic analysis is, similarly, likely to open up new avenues for the discovery of virulence determinants in other pathogens.

Measurement of in situ activities of nonphotosynthetic microorganisms in aquatic and terrestrial habitats.

Living in a fungal world: impact of fungi on soil bacterial niche development.

Richard C. Summerbell,  Wietse de Boer,  Lynne Boddy … (2005)
The colonization of land by plants appears to have coincided with the appearance of mycorrhiza-like fungi. Over evolutionary time, fungi have maintained their prominent role in the formation of mycorrhizal associations. In addition, however, they have been able to occupy other terrestrial niches of which the decomposition of recalcitrant organic matter is perhaps the most remarkable. This implies that, in contrast to that of aquatic organic matter decomposition, bacteria have not been able to monopolize decomposition processes in terrestrial ecosystems. The emergence of fungi in terrestrial ecosystems must have had a strong impact on the evolution of terrestrial bacteria. On the one hand, potential decomposition niches, e.g. lignin degradation, have been lost for bacteria, whereas on the other hand the presence of fungi has itself created new bacterial niches. Confrontation between bacteria and fungi is ongoing, and from studying contemporary interactions, we can learn about the impact that fungi presently have, and have had in the past, on the ecology and evolution of terrestrial bacteria. In the first part of this review, the focus is on niche differentiation between soil bacteria and fungi involved in the decomposition of plant-derived organic matter. Bacteria and fungi are seen to compete for simple plant-derived substrates and have developed antagonistic strategies. For more recalcitrant organic substrates, e.g. cellulose and lignin, both competitive and mutualistic strategies appear to have evolved. In the second part of the review, bacterial niches with respect to the utilization of fungal-derived substrates are considered. Here, several lines of development can be recognized, ranging from mutualistic exudate-consuming bacteria that are associated with fungal surfaces to endosymbiotic and mycophagous bacteria. In some cases, there are indications of fungal specific selection in fungus-associated bacteria, and possible mechanisms for such selection are discussed.