Effects of Rising Temperature on the Growth, Stoichiometry, and Palatability of Aquatic Plants 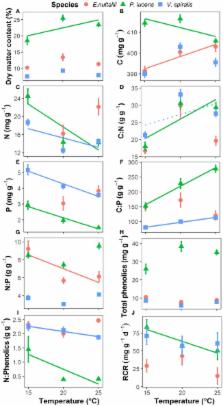 Global patterns of plant leaf N and P in relation to temperature and latitude.

Peter Reich,  Jacek Oleksyn (2004)
A global data set including 5,087 observations of leaf nitrogen (N) and phosphorus (P) for 1,280 plant species at 452 sites and of associated mean climate indices demonstrates broad biogeographic patterns. In general, leaf N and P decline and the N/P ratio increases toward the equator as average temperature and growing season length increase. These patterns are similar for five dominant plant groups, coniferous trees and four angiosperm groups (grasses, herbs, shrubs, and trees). These results support the hypotheses that (i) leaf N and P increase from the tropics to the cooler and drier midlatitudes because of temperature-related plant physiological stoichiometry and biogeographical gradients in soil substrate age and then plateau or decrease at high latitudes because of cold temperature effects on biogeochemistry and (ii) the N/P ratio increases with mean temperature and toward the equator, because P is a major limiting nutrient in older tropical soils and N is the major limiting nutrient in younger temperate and high-latitude soils.

Is There a Latitudinal Gradient in the Importance of Biotic Interactions?

A Huberty,  Amy D. Dobberfuhl,  Susan Kilham … (2000)
Biological and environmental contrasts between aquatic and terrestrial systems have hindered analyses of community and ecosystem structure across Earth's diverse habitats. Ecological stoichiometry provides an integrative approach for such analyses, as all organisms are composed of the same major elements (C, N, P) whose balance affects production, nutrient cycling, and food-web dynamics. Here we show both similarities and differences in the C:N:P ratios of primary producers (autotrophs) and invertebrate primary consumers (herbivores) across habitats. Terrestrial food webs are built on an extremely nutrient-poor autotroph base with C:P and C:N ratios higher than in lake particulate matter, although the N:P ratios are nearly identical. Terrestrial herbivores (insects) and their freshwater counterparts (zooplankton) are nutrient-rich and indistinguishable in C:N:P stoichiometry. In both lakes and terrestrial systems, herbivores should have low growth efficiencies (10-30%) when consuming autotrophs with typical carbon-to-nutrient ratios. These stoichiometric constraints on herbivore growth appear to be qualitatively similar and widespread in both environments.

This article was submitted to Functional Plant Ecology, a section of the journal Frontiers in Plant Science