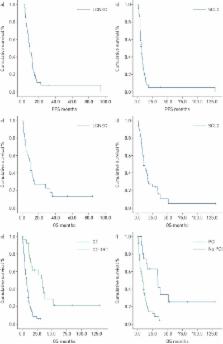 In small-cell lung cancer (SCLC), the role of chemotherapy and radiotherapy is well established. Large-cell neuroendocrine carcinoma (LCNEC) shares several clinicopathological features with SCLC, but its optimal therapy is not defined. We evaluated clinical response and survival outcomes of advanced LCNEC treated in first-line therapy compared with SCLC.

Corinne Faivre-Finn,  Michael Snee,  Sunita Kramer … (2007)
We conducted a randomized trial of prophylactic cranial irradiation in patients with extensive small-cell lung cancer who had had a response to chemotherapy. Patients between the ages of 18 and 75 years with extensive small-cell lung cancer were randomly assigned to undergo prophylactic cranial irradiation (irradiation group) or receive no further therapy (control group). The primary end point was the time to symptomatic brain metastases. Computed tomography or magnetic resonance imaging of the brain was performed when any predefined key symptom suggestive of brain metastases was present. The two groups (each with 143 patients) were well balanced regarding baseline characteristics. Patients in the irradiation group had a lower risk of symptomatic brain metastases (hazard ratio, 0.27; 95% confidence interval [CI], 0.16 to 0.44; P<0.001). The cumulative risk of brain metastases within 1 year was 14.6% in the irradiation group (95% CI, 8.3 to 20.9) and 40.4% in the control group (95% CI, 32.1 to 48.6). Irradiation was associated with an increase in median disease-free survival from 12.0 weeks to 14.7 weeks and in median overall survival from 5.4 months to 6.7 months after randomization. The 1-year survival rate was 27.1% (95% CI, 19.4 to 35.5) in the irradiation group and 13.3% (95% CI, 8.1 to 19.9) in the control group. Irradiation had side effects but did not have a clinically significant effect on global health status. Prophylactic cranial irradiation reduces the incidence of symptomatic brain metastases and prolongs disease-free and overall survival. (ClinicalTrials.gov number, NCT00016211 [ClinicalTrials.gov].). Copyright 2007 Massachusetts Medical Society.