The Eye As a Biomarker for Alzheimer's Disease 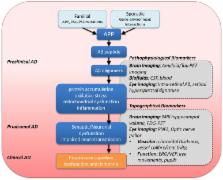 Alzheimer's disease (AD) is a progressive neurodegenerative disorder resulting in dementia and eventual death. It is the leading cause of dementia and the number of cases are projected to rise in the next few decades. Pathological hallmarks of AD include the presence of hyperphosphorylated tau and amyloid protein deposition. Currently, these pathological biomarkers are detected either through cerebrospinal fluid analysis, brain imaging or post-mortem. Though effective, these methods are not widely available due to issues such as the difficulty in acquiring samples, lack of infrastructure or high cost. Given that the eye possesses clear optics and shares many neural and vascular similarities to the brain, it offers a direct window to cerebral pathology. These unique characteristics lend itself to being a relatively inexpensive biomarker for AD which carries the potential for wide implementation. The development of ocular biomarkers can have far implications in the discovery of treatments which can improve the quality of lives of patients. In this review, we consider the current evidence for ocular biomarkers in AD and explore potential future avenues of research in this area.

A review on Alzheimer's disease pathophysiology and its management: an update.

Anil Kumar Pinnaka,  Arti Singh (2015)
Alzheimer's disease acknowledged as progressive multifarious neurodegenerative disorder, is the leading cause of dementia in late adult life. Pathologically it is characterized by intracellular neurofibrillary tangles and extracellular amyloidal protein deposits contributing to senile plaques. Over the last two decades, advances in the field of pathogenesis have inspired the researchers for the investigation of novel pharmacological therapeutics centered more towards the pathophysiological events of the disease. Currently available treatments i.e. acetylcholinesterase inhibitors (rivastigmine, galantamine, donepezil) and N-methyl d-aspartate receptor antagonist (memantine) contribute minimal impact on the disease and target late aspects of the disease. These drugs decelerate the progression of the disease, provide symptomatic relief but fail to achieve a definite cure. While the neuropathological features of Alzheimer's disease are recognized but the intricacies of the mechanism have not been clearly defined. This lack of understanding regarding the pathogenic process may be the likely reason for the non-availability of effective treatment which can prevent onset and progression of the disease. Owing to the important progress in the field of pathophysiology in the last couple of years, new therapeutic targets are available that should render the underlying disease process to be tackled directly. In this review, authors will discusses the different aspects of pathophysiological mechanisms behind Alzheimer's disease and its management through conventional drug therapy, including modern investigational therapeutic strategies, recently completed and ongoing.

S Dekosky,  S Scheff,  D. Price … (2007)
To evaluate the total number of synapses in the stratum radiatum (str rad) of the human hippocampal CA1 subfield in individuals with mild Alzheimer disease (mAD), mild cognitive impairment (MCI), or no cognitive impairment (NCI) and determine if synapse loss is an early event in the progression of the disease. Short postmortem autopsy tissue was obtained, and an unbiased stereologic sampling scheme coupled with transmission electron microscopy was used to directly visualize synaptic contacts. Individuals with mAD had fewer synapses (55%) than the other two diagnostic groups. Individuals with MCI had a mean synaptic value that was 18% lower than the NCI group mean. The total number of synapses showed a correlation with several cognitive tests including those involving both immediate and delayed recall. Total synaptic numbers showed no relationship to the subject's Braak stage or to APOE genotype. The volume of the str rad was reduced in mAD vs the other two diagnostic groups that were not different from each other. These results strongly support the concept that synapse loss is a structural correlate involved very early in cognitive decline in mild Alzheimer disease (mAD) and supports mild cognitive impairment as a transitional stage between mAD and no cognitive impairment.

David Darby,  Ian K. Dickinson,  Judith C Masters … (2007)
To compare brain beta-amyloid (Abeta) burden measured with [(11)C]Pittsburgh Compound B (PIB) PET in normal aging, Alzheimer disease (AD), and other dementias. Thirty-three subjects with dementia (17 AD, 10 dementia with Lewy bodies [DLB], 6 frontotemporal dementia [FTD]), 9 subjects with mild cognitive impairment (MCI), and 27 age-matched healthy control subjects (HCs) were studied. Abeta burden was quantified using PIB distribution volume ratio. Cortical PIB binding was markedly elevated in every AD subject regardless of disease severity, generally lower and more variable in DLB, and absent in FTD, whereas subjects with MCI presented either an "AD-like" (60%) or normal pattern. Binding was greatest in the precuneus/posterior cingulate, frontal cortex, and caudate nuclei, followed by lateral temporal and parietal cortex. Six HCs (22%) showed cortical uptake despite normal neuropsychological scores. PIB binding did not correlate with dementia severity in AD or DLB but was higher in subjects with an APOE-epsilon4 allele. In DLB, binding correlated inversely with the interval from onset of cognitive impairment to diagnosis. Pittsburgh Compound B PET findings match histopathologic reports of beta-amyloid (Abeta) distribution in aging and dementia. Noninvasive longitudinal studies to better understand the role of amyloid deposition in the course of neurodegeneration and to determine if Abeta deposition in nondemented subjects is preclinical AD are now feasible. Our findings also suggest that Abeta may influence the development of dementia with Lewy bodies, and therefore strategies to reduce Abeta may benefit this condition.

This article was submitted to Neurodegeneration, a section of the journal Frontiers in Neuroscience